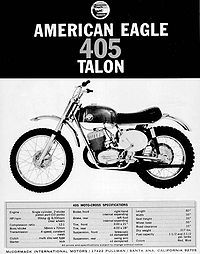 American Eagle was a motorcycle manufacturer headquartered in the United States.

The American Eagle was sold in Great Britain and Australia as the Alron and BVM in Belgium. Alron and BVM are exactly the same motorcycle built by Sprite Developments in England. The Sprite 405cc open class engine or a choice of four Spanish Ossa power plant were available.

The American Eagle burst on the scene in the early 70s with a lot of advertising and a small motocross team. The bike was light, with plenty of torque and the handling was OK, but the reliability was wretched. The engine was very similar to a Husqvarna 400 and some of the parts were interchangeable. For example, the entire Husky gearbox would fit in the Eagle cases, but no individual gear would. By 1974, the Eagle vanished.