Difference between revisions of "Aprilia Moto 6.5" 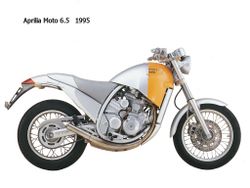 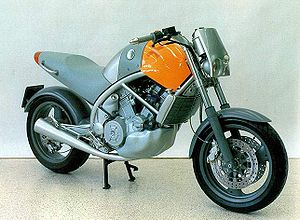 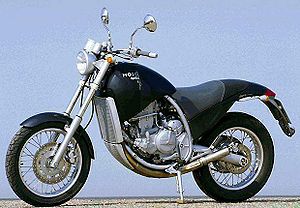 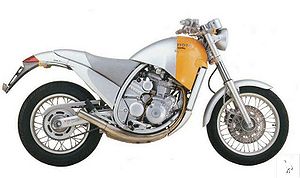 Aprilia's latest bike, the Moto 6.5, is a very different machine, albeit one that follows the Italian firm's tradition for style. It was created by French star designer Philippe Starck, whose portfolio includes everything from boats, toys and lemon squeezers to numerous buildings and interiors, including the recent museum at Groningen in the Netherlands and Bordeaux airport's control tower, his latest project.

Mr Starck is a keen motorcyclist and has produced a distinctive non-aggressive roadster, aimed particularly at tempting urban travellers away from cars, buses and trains. The Moto 6.5 certainly looks like nothing else on two wheels, thanks to its fuel tank and seat/sidepanels. It is powered by the 650cc single-cylinder unit from Aprilia's Pegaso 650 trail bike. Detuned slightly for this bike, the watercooled, five- valve engine produces a maximum of about 45bhp.

The chassis is based around a steel frame whose main tubes form a graceful curve. That shape is followed by the visible pan of the exhaust system, much of which is hidden beneath the engine. Unlike the Pegaso, the Moto 6.5 is intended to be ridden only on the road, and has considerably less suspension travel than the trail bike. Its telescopic forks and single rear shock unit, both from Italian specialist Marzocchi, hold wire-spoked wheels whose tyres are designed purely for the street. Riders of average height or less will quickly notice one advantage of the road-biased suspension: the Moto 6.5's seat is reasonably close to the ground. The Aprilia is very light, too, at just 150kg which, in conjunction with the softly tuned engine, makes it both lively and easy to ride.