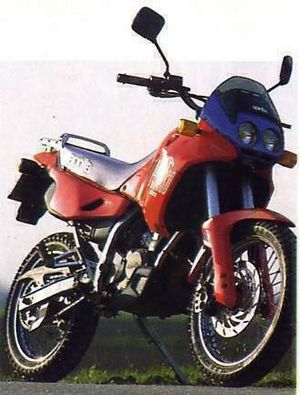 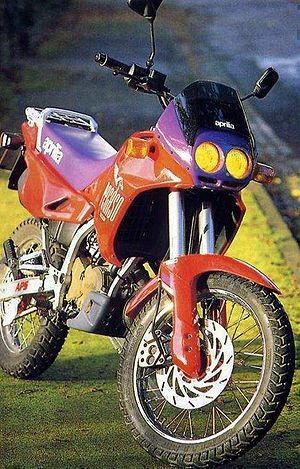 ALL BIKES OF THIS ilk are misunderstood. People think they are made for wealthy learners to stutter around on, with the derestriction kit as a plaything to be sneaked on without telling anyone, but this isn't true. Bikes like the Pegaso are just not designed for learners. Beginners should be transferred to a Yamaha XT600. This is a lot easier to ride than a Pegaso 125; it has a lower seat height and enough power all the way through the rev range to be useful. Highly-tuned 125s, even clever ones like the Pegaso, do not have get-you-out-of-trouble power on tap. The meek shall inherit the earth but until they do they'll have a crap time on a motorbike which needs aggressive clutch slip.

The Aprilia behaved like an expert's mount and the XT seemed docile in comparison. Balance, turn-in and stability were superb on the Italian bike: point and go, against the Yam's wave in the general direction and lope around like a big dog sniffing the air.

In all its upside-down glory, the front suspension was a bit sticky because the bike was new. There was actually enough stiction to hold the forks stable after braking, but this wasn't disastrous because rebound damping was enough to stop the forks suddenly pinging back.

The rear supension worked fine without being fiddled with and was loads less squidgy than most off-roadish back ends.

The overall feel was comfortable/taut, tipping slightly the way of taut. It's a hard compromise for lighter bikes to make because the all-up weight can change by such a large percentage depending on the fatness of the rider. Around town the Aprilia's barely adjustable suspenders take the rough better than the smooth which is just as acceptable as the other way round.

Power arrives in the same form as every other powervalved-to-the-eyeballs 125; chuggy-chug to 6000 revs then KPING, the frog turns into a swallow and the princess gets left behind in a cloud of fug suffering from tinitis.

This version of the poky Aprilia engine has a pressure-operated powervalve rather than the Futura's electronic one; it gives away a couple of horsepower but opens in a more relaxed fashion. That may be so but the powerband is still there to fire off the chemical mind triggers which make you go AHAHAHAHAHA-HAHAHAHAHEEEEEE and push thoughts of oblivion to the back of what's left of your brain.

The light clutch groans slightly as it slips home and then off you go, careering in a crazed fashion with BZZZZZZT noises coming from below your tingling scrotum (if you haven't got a scrotum then the pleasure from the high-frequency vibration should be exquisite).

The engine did blow up though. A faulty electronic ignition chip caused the engine to overheat and eventually seize. Aprilia assures me this has never happened before and with a new chip the bike's running perfectly.

The petrol tank, because it has to be metal because parliament is stupid (though may be less so after April), is a tatty affair which shows up badly alongside the rest of the build quality which is good. Tank range is about 80miles from lOLitres and the reserve switch is the hardest to operate in the world and took me five minutes to get it back to "on" after I'd switched to reserve. It is only like that because of parliament being stupid; the plastic tank is a much better fit and lets the tap poke out of the right place.

Because this Pegaso came from France, the headlights are yellow, but they might as well be neon disco writing for all you can see at night. They have had beam correctors fitted to flip the dip to the left.

The riding position is very comfortable; more so than almost any other supermoto/dual-sport bike bar a BMW. The seat is wide and padded well enough for easy two-hour spells; not that you'd use a 125 for such trips often. The little screen has some positive effect on windblast up to the 80mph or so the bike will make (with occasional footwork between top and fifth).

The Pegaso's home is in town. Here comes some traffic, time to be thin. Point, go, stop, slip clutch, BZZZZT, go, stop (the brakes are OK), BZZZZT again and you aren't where you wanted to be but you've beaten everthing you've just been racing. An ideal urban guerilla's weapon. Not an ideal beginner's bike.