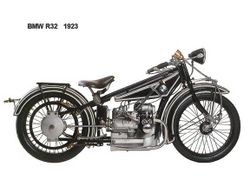 BMW was at first an airplane engine manufacturer and that after the first World War they were forced to switch to manufacturing car and motorcycles. The company was no longer permitted to produce its six-cylinder, 19-litre engines and in 1920 turned to other areas of manufacture, motorcycles among them. Its first two models, marketed as the Frink and Helios respectively, were failures but a successful proprietary engine was supplied to other manufacturers, such as Victoria. Designed by Chief Engineer Max Friz and launched in 1923, the first motorcycle to be sold as a BMW - the BMW R32 - featured a 493cc, twin-cylinder, side valve engine having horizontally opposed cylinders, and this 'flat twin' layout would forever be associated with the marque. Talking about achievements, we have to mention that Friz also designed the Type IIIa aircraft engine, the most progressive power unit of that time. The R32 became the basis for almost all the BMW motorcycle models to come, such as the R36 which developed 24 horsepower.

BMW's M2B15 proprietary engine was a 'flat twin' but one designed for installation fore-and-aft, a layout that made for a lengthy wheelbase, It was based on the British Douglas design, engine used on the Helios models.

Turning the engine across the frame, as seen in the Granville Bradshaw-designed ABC, seemed like a better arrangement, and with the crankshaft now inline, the adoption of shaft drive was the logical choice. Setting a pattern that endures to this day, BMW's first motorcycle was relatively expensive but superbly engineered and constructed, while the quality of finish was of the highest order. It was an immediate success - some 1,500 leaving the Munich factory in 1924 - and the R32 would continue in production, updated with an internally expanding front brake, until 1926.

Because of a growing demand in the market, BMW expanded its range, touring models and sport machines being released in the street. Even if there was an economic crisis in the country, BMW was successful in the 200cc entry-level class in 1931 with the R2. A 400cc single-cylinder engine was put on the list too. BMW was the first manufacturer to produce a telescopic front wheel fork with hydraulic damping. The year 1935 brought new motorcycles, the R12 and R17. One year later an entirely new model entered the market – the R5. The new BMW could now keep up with the fastest British bikes, yet was far superior in riding comfort, especially when the R 51, with straight-travel rear-wheel suspension, entered the market in 1938. Two years later, the world speed record was set by Ernst Henne who rode a supercharged 500 cc BMW bike and managed to reach a top speed of 279.83 km/h.

Then the second World War came and BMW motorcycle sales increased because of the large demand from the German army. When the war was over, BMW was left with the plant outside Munich destroyed from bombing and the the engineers had to start from scratch, so they came up with the R24, model which surpassed 17,000 units by 1950. The first sporting bike from BMW had to wait until 1951, when the R 68 was introduced. This particular model had a 594cc single cam engine and helped to the bankruptcy of three of BMW's main German competitors in 1957.

Another BMW record was set in 1959, when John Penton rode a R69 from New York to Los Angeles in just 53 hours and 11 minutes, stealing the crown from Harley-Davidson, that had a record of 77 hours and 53 minutes.

By the time the 1960s came, BMW was going through some financial trouble even tough sales were not that bad. They had to sell their aircraft engine division, but their salvation came because of the BMW automobiles division. In 1967, BMW released the last single-cylinder mode, the R27, and in 1970 a whole new line of 500, 600 and 750cc models was introduced. These models were called the R50/5, R60/5 and the R75/5 but they were replaced by another model line in 1974. The new models, the R60/6, R75/6 and R90/6 were very much similar to their predecessors but they saw some improvements to the electrical system and frame geometry. By introducing the R 45 and R 65 in 1978 the company expanded its range with the addition of the smaller Boxer models. BMW had eight models on the market with capacities of 473, 599, 649, 797, and 980cc. In 1975, BMW presented a sport model called the R90S, which has become a genuine collector's piece nowadays. Two years later, the R75 line was introduced and this line included a 1000cc model called the R100S. As the 80s were just getting started, in 1983, came another 1000cc model from the German manufacturer, the K100, but unfortunately it didn't have the wanted success. 1985 marked the return of the R line, with the introduction of the R100RT. The BMW F 650 Funduro was another important model of the company. Launched in 1993, the new single-cylinder machine was an appealing model, and helped BMW to win new customer types, including female riders. On the same perion, BMW expanded the R series, the R 1100 GS enduro model being a star at the Frankfurt Motor Show. Soon, the R 1100 R roadster, without fairing, was released along with the smaller R 850 R. One year later, the R 1100 RT tourer, full fairing was launched. Year after year, new models were available for the public: K1200 RS in 1996, R 1100S in 1998.