Difference between revisions of "BMW R17" 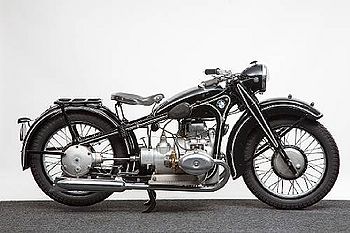 Having broken fresh ground with the launch of the pressed-steel framed R11 in 1930, BMW followed that up with the introduction of an hydraulically-damped telescopic front fork on the BM R12 and BMW R17 models, which were also notable as the first BMWs to have a four-speed gearbox. First seen at the Berlin Motor Show in February 1935, the newcomers were otherwise virtually unchanged from their R11 and R16 predecessors apart from a strengthened crankshaft. The sporting, twin-carburettor, overhead-valve R17 produced 33bhp at 5,000rpm and would be BMW's most powerful production roadster until the introduction of the BMW R68 in 1952. It was priced at 2,040 Reichsmarks, making the R17 the most expensive German motorcycle of its day. Only 436 were produced between 1935 and 1937 and today this rare and exclusive model is one of the most sought after of pre-war BMW motorcycles.