Difference between revisions of "BMW R35"

The R4 was superseded in 1937 by the R35. Starting from the R4 engine, the bore was reduced to bring capacity down to 340cc; the cylinder head was taken from the less commercially successful R3. It developed 14hp and had a top speed of 100km/h. In common with its predecessors the R35 has a pressed steel frame, the last BMW single to do so. Other BMW models at the time had twin loop tubular frames, however, the R35 was a budget model so the pressed steel frame kept costs down, as did the telescopic forks with no hydraulic damping. Even without damping the telescopic forks were a vast improvement over the R4’s forks which had a basic cantilever spring, friction dampers only being fitted to late R4 models. Production of R35's had been transferred to Eisenach in around 1940, a few thousand were built in the eastern zone between '49 & 55, up to 1950 they were even badged as BMW, much to the displeasure of the real BMW.

Wiki says 83,000. Also to read there: in 1951 BMW has won the lawsuit, that AWTOWELO is not allowed any more to name Eisenach-made BMW-vehicles BMW.

The engine was a air cooled single cylinder, four-stroke. A 72.0mm bore x 84.0mm stroke result in a displacement of just 342.0 cubic centimeters. Fuel was supplied via a overhead valves (ohv). 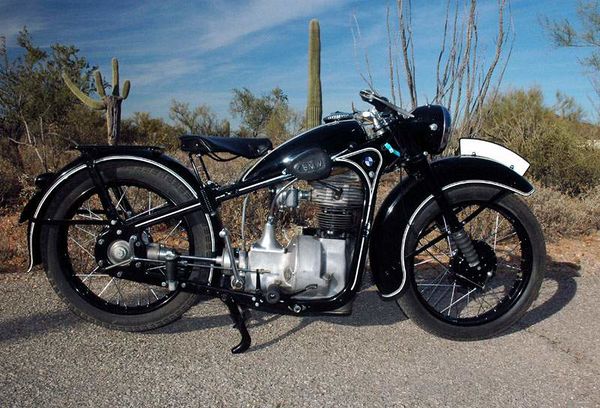 The 1937 BMW R 35 has, at its heart, an air-cooled, four-stroke, 342cc, single vertical cylinder powerhouse paired to a four-speed manual transmission and can produce a claimed 14 horsepower at 3500 rpm. It also comes with features such as laced wheels, a drum braking system, a telescopic fork as a front a suspension, a hard-tail rear one, a sprung, single saddle, a large headlamp, full fenders, a center stand and wide handlebars.