Difference between revisions of "BMW R37"

The bike has a 3 speed, manual transmission. Power was moderated via the dry, single plate.

It came with a 26 x 3.00 front tire and a 26 x 3.00 rear tire. Stopping was achieved via 150mm drum in the front and a block brake in the rear. The front suspension was a twin cantilever spring while the rear was equipped with a hard-tail, sprung seat. The wheelbase was 54.33 inches (1380 mm) long. 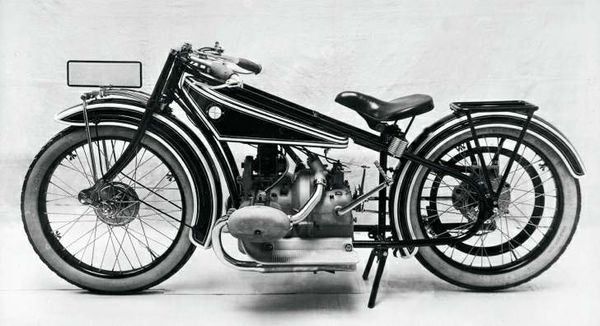 The 1925 BMW R 37 comes with features such as front and rear luggage racks, laced wheels with whitewall tires mounted on them, a cantilever spring front suspension coupled to a hard-tail in the rear, a single, sprung saddle, a front drum brake and a block brake in the rear, a center stand and pull-back handlebars. In the engine department it sports an air-cooled, four-stroke, 494cc, boxer twin cylinder engine mated to a three-speed manual transmission and can produce a claimed 16 horsepower at 4000 rpm.