Difference between revisions of "BMW R45" 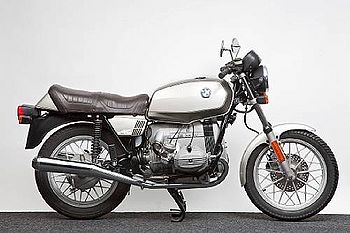 BMW extended its range of horizontally opposed twins in the late 1970s with the introduction of the R45 and R65. Looking very much like scaled down versions of BMW's larger models, the duo, which shared identical cycle parts, featured sharper, more modern styling while both weight and overall dimensions were reduced. For the German market, the 473cc R45 came with a reduced power output of 27bhp (to qualify for favourable insurance) while versions sold elsewhere had 35bhp on tap. Tested by Bike magazine in 1979, the R45 recorded a top speed of 95mph (154km/h) while returning an overall fuel consumption of 56.2mpg (5.0litres/100km). Few changes were made to these smaller twins before production ceased in 1985. This R45 displays a total of 72,982 kilometres on the odometer and was acquired by its last owner, prior to Willy Neutkens, in 1994. The machine is offered with Netherlands registration papers (1980).