Difference between revisions of "BMW R60"

In the 1970s, author, philosopher and motorcycle enthusiast Robert M.Pirsig left his home in Minnesota to ride across the United States to the Pacific Ocean. For his mount, he chose his trusty /2 series BMW motorcycle. The trip brought adventures, recounted in his bestselling book, Zen and the Art of Motorcycle Maintenance, which inspired a generation to set off on their own BMWs in search of quality motorcycling. Steve jobs as also known to ride this same bike. 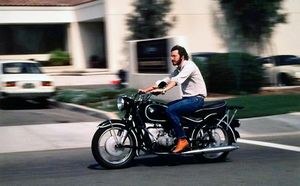 The engine was a air cooled two cylinder boxer, four-stroke. A 73.5mm bore x 70.6mm stroke result in a displacement of just 599.0 cubic centimeters. Fuel was supplied via a overhead valves (ohv).

The bike has a 5-speed transmission. Power was moderated via the dry-single plate-cable operated.

At the end of 1954, BMW dropped its existing trio of flat twins - the R51/3, R67/2 and R68 - replacing them with the BMW R50 and BMW R69. The engines were little altered, significant changes being concentrated on the frame and cycle parts, which now featured an Earles-type leading link front fork and swinging-arm rear suspension. The R67/2, a lower-compression model much favoured by sidecarists, was not replaced until the arrival for 1956 of the R60, which used a low-compression version of the R69 engine. The sidecar market remained an important one for BMW, and the new front fork's bottom link incorporated alternative mounting points giving suitable trail should a 'chair' be attached. In 1960 the flat-twins range was revised as the '/2', most of the changes being inside the engine which received a strengthened crankcase and crankshaft, hard-chromed piston rings, improved internal ventilation, new cam followers and a stronger clutch assembly. The R60/2's compression ratio went up from 6.5:1 to 7.5:1, boosting peak power to 30PS (29.6hp SAE). Towards the end of production, the telescopic front fork developed for the forthcoming '/5' range became available as an option on machines sold in the North American market, models so-equipped being designated 'US'.

BMWs line of horizontally opposed shaft drive flat twins were the cycles of choice for many motorcycle tourers. The design provided an inherently smooth-running cycle and the German engineering made it reliable. This series of BMW models -which included the R50 and R50/2, R60 and R60/2, R50S, and R69 and R69S -lasted from 1955 to 1969. Telescopic fork versions were also available at the end of the production run, denoted as US models. The R60 was the touring version of the R69S.

Numerous accessories were available for the BMW line from a wide variety of suppliers, both through the factory and after market,as befitting a touring motorcycle that riders wanted to modify to their particular tastes. The suspension made you feel like you had never left home with the triangulated Earles front forks giving a stable ride and featuring adjustable trail settings so that a Steib sidecar could be used. A variety of seats were available, from the old-fashioned dual-saddle Pagusa seats fitted on this cycle to wide two-person bench seats for long-distance travels. Other accessories included large-capacity gas tanks, fairings, mirrors, tachometers, spot lamps, and turn signals mounted on the handlebar ends. 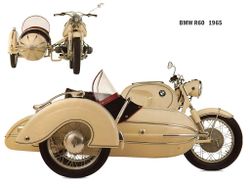 This bike uses one of the following plugs, but they are not interchangeable: 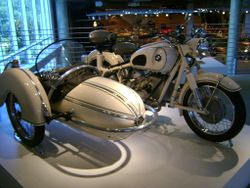 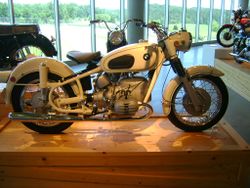 In an effort to increase their sales in the United States, BMW abandoned the Earles type leading link forks used for many years, for a modern telescopic fork. Also an all-white color was optional, which helped to jass up the basic 1950s design. BMW virtually invented the hydraulically damped telescopic fork, putting it into production in 1935. Today the majority of motorcycles use variations of this fork, with the exception of BMW, who have developed alternative designs. 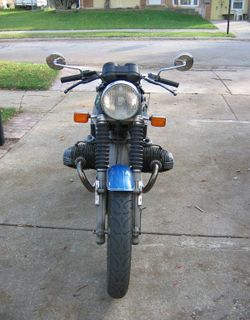 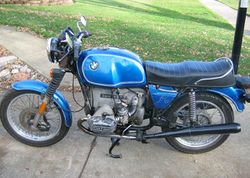 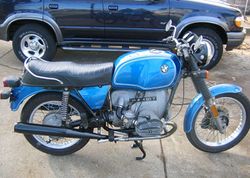 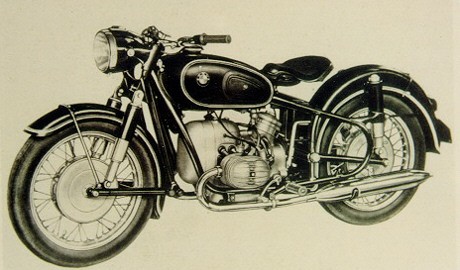 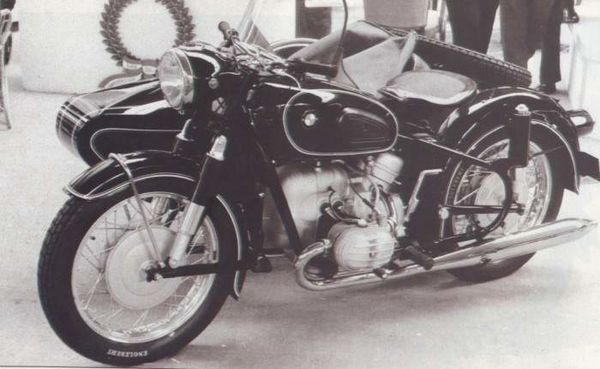 The 1956 BMW R 60 sports an air-cooled, four-stroke, 594cc, boxer twin cylinder powerhouse paired to a four-speed manual transmission and can produce a claimed 28 horsepower at 5600 rpm. It also comes with a telescopic front fork, rear plunger shocks, a single seat, a large headlamp, drum brakes in the front and in the rear, laced wheels, large fenders, a dual exhaust system and a spacious, 17-liter (4.5-gallon) fuel tank.