The Birmingham Small Arms Company (BSA) was for most of it's life Britain's largest motorcycle manufacturer. After World War 2 it became the largest in the world, producing over 75,000 bikes a year in some years of the 1950s. BSA did well in post war economy and was involved in producing guns, taxi-cabs and metal plate.

The company began in 1854 as a joint venture of a number of small Birmingham, England area gunsmiths to supply armaments to the British forces during the Crimean War. The progression to build bicycles came in the 1880's as a result of a decreased demand for firearms. BSA's motorcycle business started in 1903 building re-enforced frames to hold an imported 2hp engine. The first BSA to roll off the line with all of its parts produced in-house was a 498cc side valve engine in 1910. During World War 1, BSA supplied some motorcycles to the war effort but concentrated most of its attention to making armaments for the allied forces. 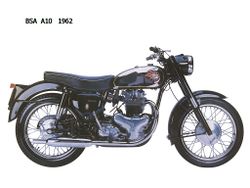