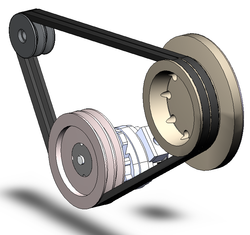 A belt is a loop of flexible material used to link two or more rotating shafts mechanically. Belts may be used as a source of motion, to transmit power efficiently, or to track relative movement. Belts are looped over pulleys. In a two pulley system, the belt can either drive the pulleys in the same direction, or the belt may be crossed, so that the direction of the shafts is opposite. As a source of motion, a conveyor belt is one application where the belt is adapted to continually carry a load between two points. Motorcycle belt drivers are normally a toothed rubber belt and are commonly used in both final drives and to rotate camshafts.

For the first ten years, Harley-Davidson used the leather belt drive that was almost universal on early motorcycles; then, like almost everyone else, it went over to chain drive, which was more efficient, did not slip and could handle higher power. By the late 1970s, however, a popular conversion kit for Harleys was a toothed belt drive for both primary and final transmission which smoothed out the power pulses somewhat and needed minimal maintenance. The new FXB Sturgis of 1980 was the first production motorcycle to use a toothed hell (Kawasaki later used one on its GPz305). So successful was the new set-up that 20 years later every new Harley-Davidson comes with a belt-drive transmission.