Bimota was formed in Rimini, Italy in 1973 by Messrs Bianchi, Morri and Tamburini - The name of the company being derived from the first two letters of each name. The SB2 was the firm's first purpose-built roadster and held its 75bhp air-cooled Suzuki GS750 motor in a tubular steel frame. The firm had used the best suspension, brakes, and tires Available at the time. Their claim to fame came around 1989 when Bimota engineers got 55 989cc Yamaha FZR engines and produced a 186mph Fuel injected motorcycle called The YB6ei Tuatara, which was at the time 16 mph faster than the record holder Kawasaki ZX-10, Several editions of the Guinness book of records confirm this feat. 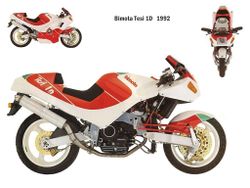 Launched in 1991, the Tesi was Bimotas try at redefining sportbikes as we know them. Named after the Italian word for thesis, the Tesi was the product of ten years of work by Bimota's chief engineer Pierluigi Marconi, who had begun his quest for an alternative to the traditional front forks while studying for his degree. The Tesi replaced conventional forks with a twin-sided front swing-arm, working a single suspension unit similar to the one used in the Yamaha GTS1000. Handlebars were linked to a series of rods to the front wheel, which pivoted on a bearing inside its hub in order to steer the bike. Powered by the watercooled, V-twin engine from Ducati's 851 sportster, tuned by Bimota with a long-stroke crankshaft that increased peak output to 113bhp, the Tesi was fast and responsive. 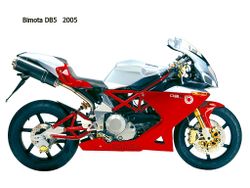