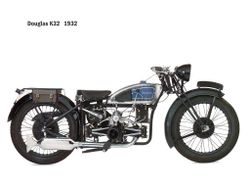 Douglas was a British motorcycle manufacturer from 1907–1957 based in Kingswood, Bristol, owned by the Douglas family, and especially known for its horizontally opposed twin cylinder engined bikes and as manufacturers of speedway machines. They also built a range of cars between 1913 and 1922.

The brothers William and Edward Douglas founded the Douglas Engineering Company in Bristol in 1882. Initially doing blacksmith work, they progressed to foundry work, and then acquired the flat twin design of W. J. Barter, the founder of Light Motors Ltd. Barter had produced his first single-cylinder motorcycle between 1902 and 1904, and then a 200 cc horizontal twin called the Fair but the Light Motors Ltd. failed in 1907 and was taken over by the Douglas family. From 1907 they sold a Douglas 350 cc version. In 1915 the engine was placed lengthways in the frame with belt final drive. During World War I Douglas was a major motorcycle supplier, making around 70,000 motorcycles for military use. In the 1920s Douglas had a Royal Warrant for the supply of motorcycles to the Princes, Albert and Henry.