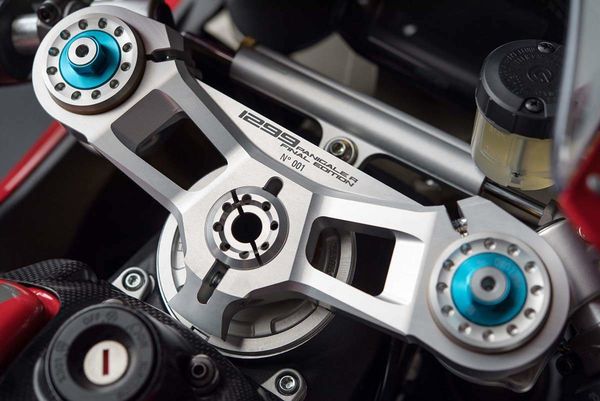 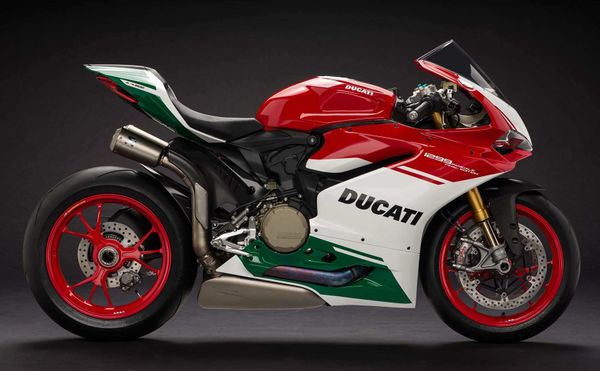 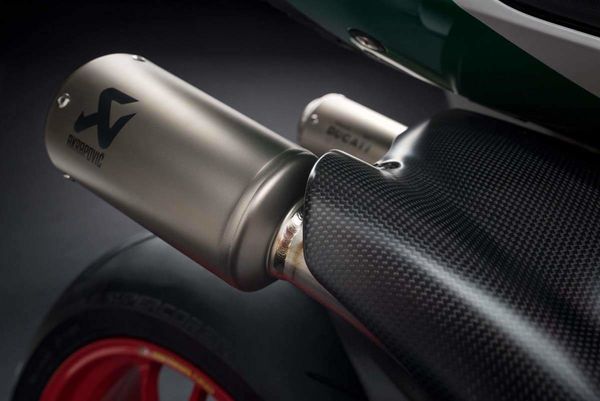 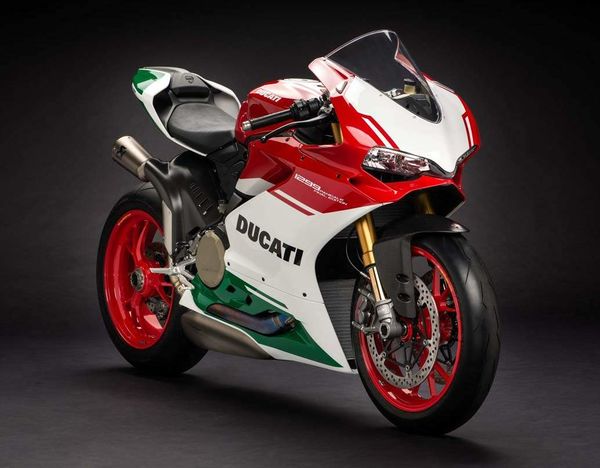 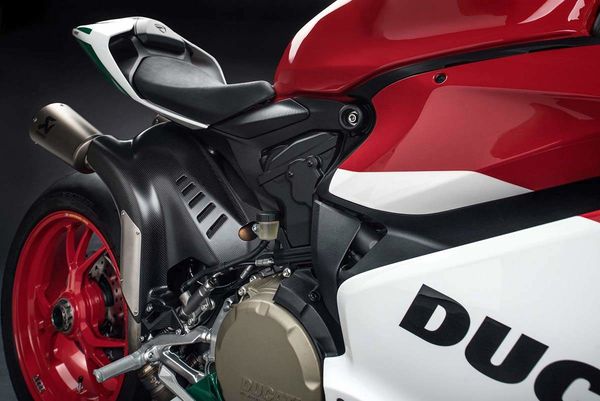 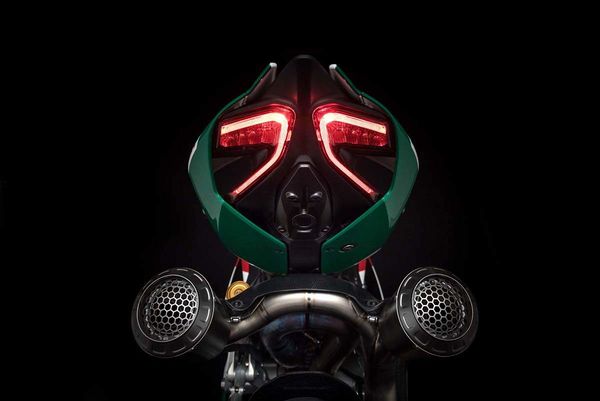 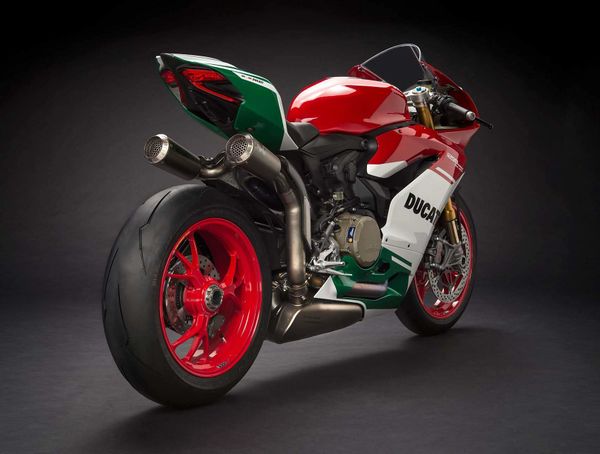 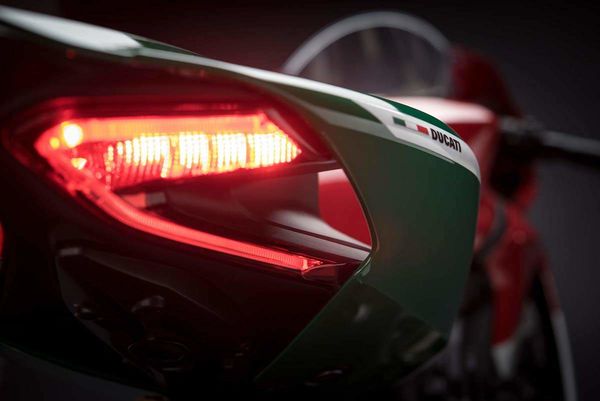 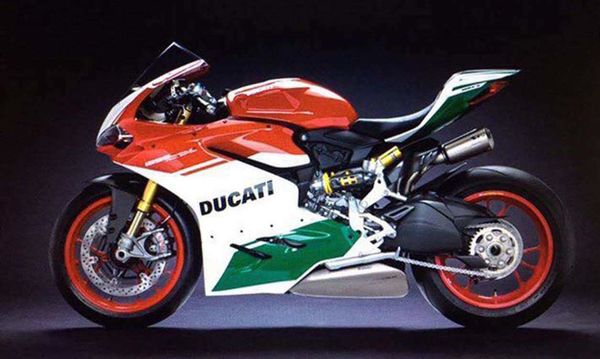 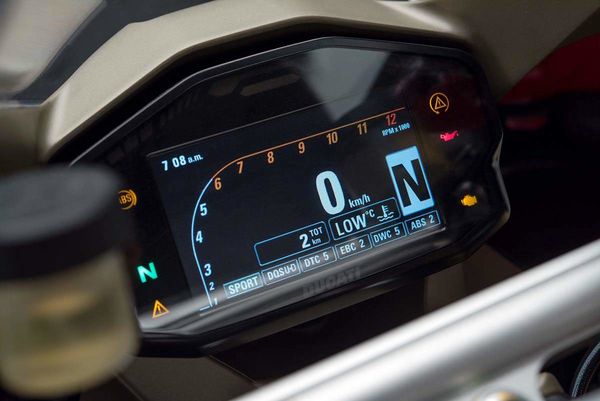 This is the celebration of the twin cylinder Ducati Superbike legacy. We combined the most advanced aluminum monocoque chassis with our most powerful Superquadro engine to create the Panigale 1299 R Final Edition. For passionate riders ready to own the strongest part of Ducati's V-twin history, complete with celebratory livery and numbered billet top yoke.

Progressively numbered, but not limited in quantity, the 1299 Panigale R Final Edition is a fully street legal, Euro 4 homologated motorcycle that is a perfect mix of a super-powerful engine and a racing-honed chassis

The Superquadro engine's bore/stroke ratio of 1.91:1 sets an extreme example of the power-maximizing ""oversquare"" architecture used in the world's most advanced racing engines. A short-stroke crankshaft and enormous pistons combined with large Desmodromically-actuated valves allow the Superquadro to breathe freely at high rpm, while a 1285cc combustion chamber ensures the ample torque that has made so many enthusiasts fall in love with Ducati's signature L-twin power.

The Superquadro engine uses large intake valves fed by advanced oval-section throttle bodies, with different height inlet ducts for front and rear cylinder, which emphasize high air flow for maximum power production. Independently controlled by the fully Ride-by-Wire system, the throttle bodies are each fitted with 2 fuel injectors: the first is set below the body and operates in lower rpm/load conditions, while the second is fitted above the throttle body and is called into action when it's time for the Superquadro to unleash the full scope of its power and torque.

The Superquadro engine in the Final Edition is based on the 1299 Superleggera engine and has a maximum power output of 209 hp at 11,000 rpm and maximum torque of 142.0 Nm (104.7 lb-ft) at 9,000 rpm. The engine is fully street legal with Euro 4 homologation and employs a lightened crankshaft with tungsten counterweights and a larger crank pin than on the standard 1299 Panigale. The conrods and valves are made of lightweight titanium, the cylinder liners are steel and the 2 segments pistons have a diameter of 116 mm.

At the end of the exhaust camshaft of each cylinder head is a centrifugal decompressor. On start-up, this device allows the profile of the cam opening lobe to be modified, slightly lifting a valve so that part of the combustion charge can escape the chamber during the engine's compression phase. Once the engine fires, the increase in rpm and associated centrifugal force modify the decompressor, cancelling the valve lift effect to bring the engine to normal operating conditions. By temporarily reducing the compression effect of the piston during start-up, a much smaller and lighter starter motor and battery can be used, contributing significantly to the extreme light weight of the overall engine and motorcycle. This ingenious system further underlines the synergistic strength achieved by engineers and designers in the uncompromising creation of the Superquadro.

The journals of the main bearings are lubricated by pressurised oil admitted through ducts inside the engine block. This serves to assure the efficient lubrication of the new crankshaft, followed by a rapid recovery of the oil thanks to a lobe pump that places the connecting rod compartment under vacuum, similar to the engines used in MotoGP. This pump is driven by gears built in a special high-strength techno-polymer and maintains the crankcase area below the pistons in controlled conditions of constant vacuum, thereby reducing resistance during the pistons' downstroke as well as facilitating oil flow for rapid recovery.

The opening and closing of throttle butterflies on the Superquadro is controlled by a fully electronic Ride-by-Wire system. The absence of a mechanical connection between the twistgrip and the throttle bodies allows the engine ECU to regulate power delivery by directly adjusting the throttle; Ride-by-Wire makes it possible to have different power and delivery based on the selected Riding Mode, to alter the level of engine back-torque (EBC), and to control any slipping of the rear wheel (DTC).

The crankcases, produced through a vacuum casting technology called Vacural®, ensure high strength at low weight along with a uniform wall thickness, and are designed to incorporate water jackets around the cylinder barrels. The engine uses wet barrels coated in Nicasil, which are inserted into the holes of the engine block's housing during the initial stages of assembly. This design allows the head to be fastened directly onto the crankcase, combining the need for rigidity of the engine's structure with a significant advantage in terms of compactness. Due to their thin structure, the cylinder barrels efficiently transfer heat to the coolant running along their walls. In addition to these barrels, the Superquadro's crankcase stands out for the use of plain main bearings, previously utilised on the Ducati Desmosedici RR engine. These bearings allow the use of large-diameter crankshaft journals, which maximize rigidity and mechanical strength to optimise the internal rotating structure to the extreme power of the Superquadro.

The Panigale's ergonomic dimensions assure a perfect integration between rider and motorcycle. The seat and handlebar positions are optimized to provide total control and comfort during sport and track riding, while the switchgear and dash are further designed to be intuitive, informative, and a pleasure to use. Grippy, machined-from-billet aluminum footpegs and a carefully-shaped seat with racing cover allow the rider to perfectly integrate with the Panigale, and focus only on the extraordinary sensations of the ride.

All large-displacement Panigales benefit from Pirelli's Diablo Supercorsa SP tires, the road version of the tire used in the Superstock 1000 World Championship: 120/70 ZR17 at front and 200/55 x ZR17 at rear, which provide the contact patch necessary to effectively transmit the Superquadro's power to the ground. Designed to maintain a precise line in straights and on curves, the rear 200/55 x ZR17 tire maximises the area of contact and corner speed by combining 200 mm width with a high profile. The tires have structures and compounds deriving directly from Pirelli's experience in the Superbike World Championship, and feature casings specially studied to guarantee rigidity in extreme braking and shoulders that maximize the contact patch. In addition, a special double compound that uses the most advanced polymers facilitates the rapid heating of the tires together with a constant grip.

True to the Panigale R's racing focus, it features competition oriented Ohlins suspension including an NIX30 fork, TTX36 shock, and steering damper, all fully manually adjustable. This system provides competition-level damping and vehicle control, while being lighter than an electronic system - contributing towards the Panigale R's incredible weight advantage over the competition.

The 1299 Panigale R Final Edition's monocoque chassis forms its structural backbone - compact, rigid, lightweight, and multi-functional. Cast in aluminum, it attaches at its rear directly to the heads of the Superquadro engine and contains the steering head and bearings at its front. In addition to performing the function of a traditional frame, the monocoque also serves as the airbox and in this way significantly contributes to lowering the overall weight of the motorcycle. Housed inside it are the air filter, throttle bodies and fuel circuit complete with injectors, making it truly unique and a revolutionary advancement to the world of traditional motorcycle construction. Standard accessories

Included are a racing windshield, billet aluminum mirror block-off plugs, and a license plate holder plug, for track sessions in which the bike's mirrors and plate holder are removed.

The 1299 Panigale R Final Edition benefits from the experience of Ducati Corse, adopting geometry which uses a 24° steering head angle along with a low swingarm pivot point. This enhances the bike's agility, and provides excellent rear traction in a wide variety of conditions. Total control

Thanks to Ducati's Riding Modes, riders can instantly vary key characteristics of the 1299 Panigale R Final Edition to suit different conditions or preferences - engine power and delivery, traction control, wheelie control, ABS, engine braking, and suspension behaviour. Three pre-set configurations, Race, Sport, and Wet, are available to be selected by using buttons mounted on the handlebar. But these are only a starting point, as each configuration's individual control parameters can be set to the specific level desired by the rider. With three custom setups ready at the push of a button, the 1299 Panigale R Final Edition becomes a perfectly tailored partner to the rider's unrelenting pursuit of speed.

The Bosch 9.1 MP ABS equips the 1299 Panigale R Final Edition as standard, and is a latest-generation system that performs combined braking with control rear wheel lift to guarantee the shortest braking distances and greatest stability in any conditions. Further, the system interfaces with the Bosch Intertial Control platform, allowing maximum braking even while the motorcycle is leaned over.

The instrument panel on the 1299 Panigale uses a full TFT display.  The color display's configuration is variable and automatically adapts to variations in environmental light and to the selected Riding Mode.  In the "Road" and "Wet" Riding Modes, speed takes centre stage and is displayed in large numbers in the middle of the display, whereas the two boxes containing "supplementary information" underneath provide data on total mileage and engine coolant temperature. In the "Race" Riding Mode, the display layout is automatically reconfigured, shifting the display of the vehicle's speed in the lower information box at left and making room for the last lap time, centrally displayed in large numbers. For the first time on a Ducati motorcycle, the display features a "lean angle visualization," allowing the rider to see their achieved lean angle displayed on the dash in real-time.

The 1299 Panigale R Final Edition uses the lightest and most advanced battery technology available, Lithium-ion. This allows it to save over 2 kg compared to a normal battery.

The DDA+ GPS (Ducati Data Analyzer) is fitted as standard amd integrates a GPS signal to create a "virtual finish line". The system automatically detects, without any intervention by the rider, the conclusion of the lap and stops the chronometric time. Integration with the GPS signal also provides visualisation on the circuit map of the trajectories ridden and the main parameters of the vehicle: throttle opening, speed, rpm, gear engaged, engine temperature, DTC activation, and lean angle.

The engine braking control (EBC) system works in combination with the slipper clutch to prevent and manage any locking of the rear wheel during aggressive downshifting. The rider can select the level of engine braking felt from one of 3 levels, allowing them to perfectly customise the motorcycle's feeling during deceleration and turn entry.

DWC EVO uses information on the 1299's pitch from the Bosch IMU to control front wheel lift and allow maximum acceleration in safety. Using entirely new software, DWC EVO more accurately detects the occurrence and severity of wheelies and intervenes to control them with a high degree of robustness and precision.

Ducati Traction Control (DTC) EVO is an advanced system that uses information from the Bosch IMU to monitor and maintain control over slipping of the rear tire. It operates on the basis of eight different levels of intervention, each of which has been programmed to respond to a different tolerance to rear slipping. Each Riding Mode is assigned a preset level of activation, which can then be modified according to the riders' desire. Level 8 corresponds to an activation of the system with the slightest slipping, while Level 1, best used by expert riders and professionals, has a higher tolerance and thus allows a much higher amount of slip before intervening.

The 1299 Panigale R Final Edition uses the Bosch Inertial Platform, which is centered around an Inertial Measurement Unit (IMU). The IMU constantly monitors the motorcycle's lean angle and fore/aft pitch, interfacing with the ABS, DTC Evo and DWC Evo, ensuring that these systems operate at maximum effectiveness regardless of the motorcycle's position.