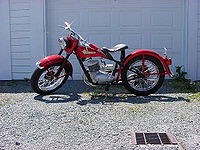 The Harley-Davidson BT was more commonly known as the Super 10. In 1960, Harley-Davidson consolidated the Model 165 and Hummer lines into the Super-10. Back in the 50's and 60's, many states had a "junior driver's license" which allowed 14-year-olds to drive motorcycles under 5 Horsepower. These laws were prevalent in the mid-western states. In those days, Go-Karts and MiniBikes were quite popular, and Harley-Davidson tapped the junior market with special versions of the Model 165, Super-10, and Pacer.

The BTU's achieved the "throttling effect" by using a special cylinder head with a restricted intake port rather than a different carburetor.