REFINEMENTS ARE NUMEROUS IN HARLEY-DAVIDSON MODELS FOR THE COMING SEASON 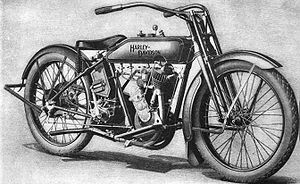 Comparatively Slight Price Advance Is Offset by Improvements in Most Attractive Line the Company Has Ever Offered; New Clutch Bearing, More Efficient Carbureter, Special Mesinger Saddle, and Aids to Cleanliness and Silent Running Are Among 1918 Features; New Sidecar Has Redesigned Chassis, Additional Springing in Seat and Back and High-Quality Upholstering

MILWAUKEE, Sept. 11.—Five models, ranging from the 16-horsepower, three-speed, electrically equipped twin, at $320, to the 6-horsepower, direct-geared single, listing at $235, comprise the up-to-the- minute array of Harley-Davidson motorcycle offerings for the 1918 season, and the strikingly improved sidecar rounds out a line that the company points to with pride as representative of the biggest value it has ever been able to place upon the market.

Next in line to the electrically equipped model comes the 16-horsepower, three-speed twin without electrical equipment. This machine is fitted with a high tension Ber- ling magneto and is priced at $290. The three-speed single-cylinder model, rating at 6-horsepower, also has Berling ignition and is listed at $260. The direct-geared models, a 16-horsepower twin and a 6-horsepower single, both are Berling equipped and are sold at $275 and $235, respectively. The new sidecar price is $90.

One of the most interesting features of the 1918 announcement, which has just been released from the factory, is the price schedule. All things considered, it was expected that the Harley-Davidson company would find it necessary to quote substantial price advances on the full line in order to maintain its quality standards in the face of existing industrial conditions, but the increases on the 1918 models are surprisingly small. The key to the mild upward movement is found in the price of the electrically equipped, three-speed twin which will sell for $320 during the coming season, as compared with $310 for the corresponding model last year.

When consideration is given to the skyward trend of all wares, mechanical and otherwise, and to the fact that most automobiles have gone up in price anywhere from 10 per cent, to 35 per cent., it is

apparent that the Harley-Davidson folks have achieved something approaching a manufacturing miracle in the production of their 1918 line. If the new prices had been quoted for the line as it stood in the current year they would doubtless have been justifiable, in view of material and labor conditions, and to find them scheduled for the 1918 offerings—with the long list of improvements—is an outcome which even the most optimistic dealers hardly expected. The Harley-Davidson Increase is less than 3l/4 per cent.

The company's ability to market the new line with the relatively small advance referred to can be credited to increased production, efficient standardization of models and greater standardization of manufacturing operations. The combination of the 1918 improvements with the unexpectedly slight price increase offers dealers a remarkable opportunity to take advantage of the lively demand for motorcycles, the Harley-Davidson company points out, and enables the trade to emphasize efficiency more than ever before without sacrificing the vital argument of economy. The Harley-Davidson folks believe that 1918 is to be a banner year for motorcycle sales, and all their plans have been laid accordingly. 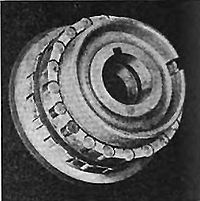 One of the most important improvements in the Harley-Davidson motorcycle for the coming season is a new clutch bearing. The clutch is now mounted on a large, high-duty, double-row roller bearing of Harley-Davidson design and manufacture which replaces the ball bearing formerly employed. In addition to the new bearing's remarkable resistance to wear, it is featured by exceptional lubricating simplicity. Heretofore it was necessary to remove the chain- guard and take the clutch apart in order to pack the ball bearing with grease every season; the new roller bearing can be lubricated with an ordinary oil can through an opening in the chain- guard.

From this oil pocket the lubricant is distributed to the rollers and the bearing surfaces by an ingenious system. Four oil holes carry the lubricating fluid from the oil pocket to a large felt distributing washer, which in turn keeps the bearings properly oiled. The system is neatly worked out, and, owing to the construction of the bearing, it is impossible for any oil to be thrown out of the clutch bearing, or for any to leak out.

The new bearing is really an important improvement, because in many cases riders would overlook the lubricating of the old style clutch bearing, partly owing to the fact that it required lubricant so seldom, and would thus impose undue hardship upon the clutch. With the new system, which is so easy to handle, it is certain that the clutch bearing will never be allowed to run dry. A few drops of oil every thousand miles will meet all requirements.

In trying out the new clutch bearing, the Harley-Davidson company fitted one in a test machine perfectly dry, neither oil nor grease being applied. This bearing has now been in service more than four months, and although as dry as a bone it has not given any trouble. The factory engineers, not without justification, look upon this as the strongest kind of a testimonial to the efficiency of the bearing. They are convinced that the new bearing is now as nearly trouble-proof as possible.

The 1918 Harley-Davidson will prove to be even more economical in gasoline consumption than the type previously used, as an important improvement has been developed which permits of a more careful and precise adjustment of the spray nozzle. This desirable result is brought about by means of an extra adjustment which enables the rider to set the carburetor so that the motor will perform as satisfactorily at high and low speeds as at intermediate speeds. In other words, one setting of the carburetor will afford the best possible results at all speeds. The advantage of this arrangement will be at once apparent to the rider of even limited experience.

With the aim of saving the rider further trouble, the Harley-Davidson engineers have now provided an oil well in the end of the inlet valve rocker-arm stud. This will provide ample lubrication for this highly important bearing, so that it will not be necessary to oil it every day or two. A felt plug in the oil well helps to retain the lubricant in the reservoir. Under the old arrangement when the rider neglected to oil the rocker-arm bearing the dry bearing was naturally prone to make the motor a trifle noisy, but with the new lubricating provision this possibility will be eliminated. The 1918 machines have longer crank case breather pipes than the former model?. In the new machines the breather pipe is carried below the chain guard, doing away with any chance for oil to leak out of the chain guard and soil the rider's clothing. This refinement is in line with the Harley- Davidson company's policy to leave nothing undone that will contribute to the attractive appearance of the motorcyclist on the road.

A new saddle of Mesinger manufacture, designated as No.2 Harley- Davidson Special, is standard equipment on all the 1918 models. This saddle is very sturdily made, and is extremely comfortable and well sprung. As an option the company offers another saddle, known as No. 1 Harley-Davidson Air Cushion, also bearing the Mesinger brand. An extra charge of $3 is made for this particular equipment.

Another improvement is noted in the chain guard of the 1917 models, which provides more clearance than heretofore between the front drive chain and the guard. This arrangement eliminates the possibility of any noise resulting from the chain striking against the guard when the chain is a trifle too loose.

As was noted in the opening paragraphs, the Berling magneto is now standard equipment: on all models excepting the electrically equipped 18-J.

The warning signal on the electrically equipped model ha.- been refined in several ways so that a strong tone is assured a: all times. This improvement in the volume and dependability of the tone, combined with the sturdy construction and pleasing appearance which characterize'! last year's horn, results in a warning instrument calculated to meet every requirement of the exacting rider. The horn on the electrically equipped machine i> now fitted with a brace to guard against undue vibration in rough going.

Even the casual observer will note at once that the finish of the new Harley-Davidson makes a stronger appeal to the eye than that of former model-, and this is due to a new combination of colors in the panel striping. Without being in the least flashy, the 1918 color scheme makes an instantaneous and pleasant impression. In fact. the present finish is credited with being the most striking the company ever used. Haying in mind the fact that the sidecar has at last come into its own, and that many dealers throughout the country are selling close to 100 per cent, of their motorcycles with sidecars attached, the Harley-Davidson company has given particular attention to the improvement of its passenger attachment. The company enjoyed a remarkable increase in sidecar business during the 1917 season, and is planning a still further speeding up of its sidecar production for the coming year.

While appearance has not for a moment been overlooked, the chief changes in the sidecar for 1918 have been made with a view to adding to the passenger's comfort. The body is now mounted further back so that there is a better distribution of weight on the sidecar springs, and new upholstering also contributes materially to ease of riding. The upholstering, of perfectly smooth finish, is almost limousine-ish in its luxury and its smooth surface does not collect dust.

Coil springs are now built into the seat cushion and back, and those who have been privileged to make trips of considerable length in the new sidecar assert that the improved springing arrangement, combined with the new cushions, insures comfort under any conditions of travel. The improved design of the sidecar door makes it easier to enter and leave the passenger attachment, and the 1918 panel effect has also added to the door's strength.

The sidecar chassis has been redesigned, with the result that it has more road clearance and even greater strength than formerly. A new type of connection, and a new brace between the sidecar frame and the motorcycle seat post, add at least 50 per cent, to the comfort of both sidecar occupant and driver.

An improved type of shock-absorbing rebound snubber contributes still further to the wearability of the sidecar, while at the same time increasing the comfort of the traveler.

The outside lines of the sidecar have been changed somewhat, with the view of making them conform pleasingly to the various improvements in the third-wheeler, and the neat appearance of the new cowl is particularly noticeable.

A neater and stronger arrangement for the front end brace of the side wheel fender has been effected, and this, together with an additional fender brace, makes for increased sturdiness in this part which is so prone to shake loose in long riding over rough roads.

Taken altogether, the 1918 Harley-David- son sidecar is much more comfortable than previous models, more handsome in appearance and easier to handle on the road because of its perfect balance and the improved connections between the sidecar frame and the motorcycle. 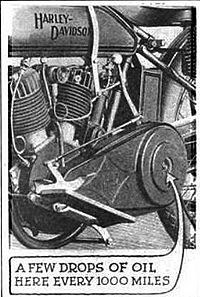