Difference between revisions of "Harley-Davidson XA" 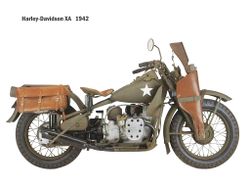 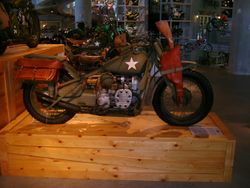 Built under a U.S. Government contact during World War II only 1,011 of these unusual motorcycles were produced as the North African phase of WWII was almost over when the model was ready for production. Together with the increased use of the Jeep, and the lack of interchangeability with other Harley-Davidson military models a major concern, the project was canceled. It features rear shaft drive, a hand clutch with foot shift and special disc wheels for desert use. It was a very close copy of the German BMW and Zundapp machines.

The U.S. Army also asked Harley-Davidson to produce a new motorcycle with many of the features of BMW's side-valve and shaft-driven R71. Harley largely copied the BMW engine and drive train and produced the shaft-driven 750 cc 1942 Harley-Davidson XA. This shared no dimensions, no parts and no design concepts (except side valves) with any prior Harley-Davidson engine. Due to the superior cooling of the flat-twin engine with the cylinders across the frame, Harley's XA cylinder heads ran 100 °F (56 °C) cooler than its V-twins.[1] The XA never entered full production: the motorcycle by that time had been eclipsed by the Jeep as the Army's general purpose vehicle, and the WLA—already in production—was sufficient for its limited police, escort, and courier roles. Only 1,000 were made and the XA never went into full production. It remains the only shaft-driven Harley-Davidson ever made.

A 77.8mm bore x 77.8mm stroke result in a displacement of just 740.0 cubic centimeters. Fuel was supplied via a sidevalves.