Difference between revisions of "Harley-Davidson XLCH"

The XLCH was a sportier version of the XL883 Sportster introduced in 1959 two years after the original.-- "CH" supposedly standing for "Competition Hot."

It also featured the now-famous "eyebrow" headlight cover that remains a Sportster trademark. Harley-Davidson also offered the XLH, a dressed-up, touring-influenced version that was outsold by its sportier sibling.

Power rose steadily over the years, earning the fleet Sportster the nickname "King of the Drags" -- an unofficial title it would hold until the late 1960s.

Of course, this was at a time when most of its competitors were British 650-cc twins, which spotted considerable displacement to the 883-cc Sportster. And in drag racing, size matters. 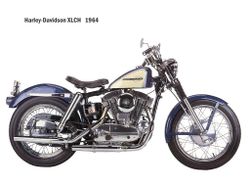 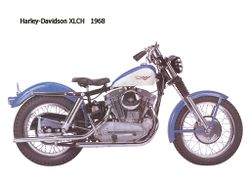