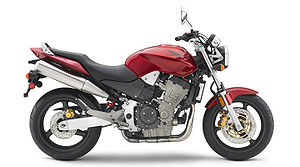 Introduced in 1998, the European only Honda CB600F Hornet is a motorcycle powered by a liquid-cooled, carburetted 599cc in-line 4-stroke 4-cylinder DOHC engine that produces just over 95 horsepower and weighs 176kg dry. The bike has a six-speed transmission. Its suspension consists of a front cartridge fork and a rear single shock. Its brakes are dual-disc in the front and single-disc in the rear.

As a sport-oriented Motorcycle that provides an upright riding position and lacks a fairing, it is considered a standard or "naked bike".

Related is a 919cc carburetted version called the CB900F