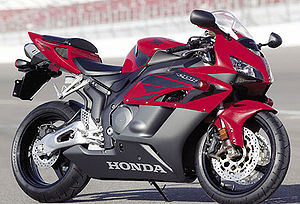 The 2003 CBR1000RR is the street, mass-production version of the legendary liter-class bikes which took countless victories in the superbike series around the world. This CBR is also inspired from the RC211V MotoGP and retains the Unit-Pro Link suspension and the Honda Electronic Steering Damper (HESD) developed for the prototype.

Ready for a proud presence on the street, the 2003 CBR1000RR is even more eager to shine on the race track and show the riders the real meaning of sport performance.

The CBR 1000 RR Fireblade, a Honda motorcycle manufactured between 2004 and 2007, had several attractive features, such as the electronic starter system or the chain final drive.

The 2008 model of the CBR 1000RR Fireblade Honda bike has multiple competitors on the market, such as Ducati 1098, Kawasaki Ninja ZX-10R and Suzuki GSXR1000.

The Honda CBR1000RR is marketed in the UK and Europe with the Firebalde suffix, but underneath the fairing, we're still dealing with the same premium Honda superbike build. Derived from the racing programs an sharing some components and technologies with the WSBK and MotoGP machines, the 2012 Fireblade is an all-out sport machine, engineered for the ultimate performance.

The 2005 CBR1000RR is the street, consumer version of the racing liter-class bike which keeps on winning on the tracks around the world since it's launch. Loaded with a lot of MotoGP-derived component and technologies, this superbike delivers outstanding sport performance and a tad more comfort than a track-only bike.

Radial brakes, an electronic steering damper, centralized fuel tank, pro-class suspensions and frame, and dual-stage injection are all all stock, while the RC2111-inspired styling makes the whole package look as good as it performs.

The Honda CBR1000RR hares DNA with no other than the MotoGP RC211V machine, and is the streetable expression of what high-performance liter-class bikes should really be like. This model year brings massive updates in the power unit department, with new head porting and combustion chambers, new cams, valves and spring systems. a higher red line, new gears an covers, a redesigned ram air intake and a new chassis geometry.

Upgraded brakes and revised suspensions, an updated styling and a better seat are also on the long list of improvements CBR1000RR made in 2005 come with.

One of the most popular superbikes of all times, the CBR1000RR is the streetable version of Honda's on-track development program. Embedding a lot of MotoGP-derived technologies and knowledge, the 2006 CBR1000RR is setting a new standard in sportbike maneuverability and performance, while providing riders with a ton of exclusive features.

The Honda Electronic Steering Damper (HESD) works in conjunction with the RC211V-deived frame, while other features, such as the cassette gearbox, radial calipers, center-up silencer, Unit Pro-Link rear suspension and dual-stage injection are also standard trim for this aggressively-styled machine.

A streetable version of Honda's high-performance track machinery, the 2007 CBR1000RR is a liter-class sport bike which brings a heap of new parts, from a new engine to the upgraded slipper clutch, better brakes, a new exhaust, new frame and swingarm, lights and bodywork.

All in all, an almost brand new superbike sworn to allow skilled riders to push their limits further on the track and also provide extreme sensations on the open highway. If race bikes with a tad more tamed nature are your thing, then the 2007 CBR1000RR is definitely one choice worth looking into.

Inspired and derived from the race track machinery, the 2008 CBR1000RR is a liter-class bike which will take your breath away. Dripping with monstrous power and loaded with MotoGP-derived technologies such as the Unit Pro-Link rear suspension, this machine also brings a top-drawer racing-class fork and electronic steering damper for increased tracking precision.

A toy for experienced bikers and acing enthusiasts, the 2008 Honda CBR1000RR comprises multiple lightweight aluminum parts to shave weight and add to the overall handling. Revised mass distribution makes the bike more compact, and the tank placed low in the frame helps for an even "easier-to-ride" center of gravity.

Honda offers a top-notch version of their acclaimed CBR1000RR machine, endowed with the extra safety ABS brakes bring in. Having the anti-lock brakes and combined braking in a coherent safety-focused system provides riders with an improved feeling of being in control. More than the overall feel of the bike, these new brakes also improve road safety by adding to stability when braking on wet asphalt. Likewise, strong braking will also stop the bike in a shorter distance.

For 2009, Honda brings some upgrades to their acclaimed CBR1000RR sport bike, with the most noticeable being the increased diameter of the flywheel, now offering more inertia and increased engine performance. Aesthetic updates have also been made, in the shape of a redesigned license plate stay, which is now easier to remove for track days. A new muffler cover was also added for a sportier look.

If a high-performance liter-class bike is what you're after, then the 2009 CBR1000R is one of the best money can buy: light, frightfully powerful, boasting exceptional handling, this machine is a pro's treat, with all the might of a racing bike in a streetable package.

Ready for both city rides, but obviously more at home on the track, the 2010 Honda CBR1000RR is the sum of all the racing goodies the Japanese manufacturer has in store. Packing mind-boggling performance specs proven at the races and then tuned to a streetable level, the 2010 CBR1000RR is one of the most loved liter-class superbikes of the planet.

Combined ABS, an electronic steering damper and race-derived twin-spar aluminum chassis are only few of the tech features which make the CBR1000RR stand in the pack-leading position. Add in the HMAS suspensions, centrally-placed tank and a heap of other high-tech details and prepare for a mind-blowing experience!

Building on the revered heritage of the 900RR, the 2011 Honda CBR1000RR brings performance and maneuverability to the next level. Th bike now rolls on new wheels, with Balance-Free Rear Shock and a Big Piston Fork, while the bodywork and instrumentation has also been upgraded.

A plethora of color-matching accessories is available for the 2011 CBR1000RR, such as rear seat cowl, multiple carbon parts and a track-specced racing kit. Combined ABS is standard, so braking in full confidence is now a part of everyday riding.

The Honda CBR1000RR needs no introduction, as it is one of the most popular superbikes of the planet. This year's iteration brings even more advanced technology to the street version of this track-developed machine, with the Big Piston Fork and Unit Pro-Link rear suspension, both meant to add more sharpness to the steering feel, on the street and on the race track, as well.

Alongside the engine and chassis revisions, the bodywork has also been finely tuned for better high-speed stability.

Introduced as a 2014 model, the CBR1000RR SP is as close as you can get to a production racer. Based on the fearsome superbike, the SP brings a lot of pro-grade components to the road game, in the shape of adjustable Öhlins suspension, race-class Brembo brakes, and hand-picked engine parts for durable and dependable performance.

The bike comes with no electronic aids, with the race-specific ABS as an option. The bike also retains all the revisions the 2013 CBR1000R got from the previous model year, so you're looking at an updated machine with plenty to offer to the experienced rider.

From the race track comes... the street version of Honda's acclaimed superbike: the 2013 iteration of the liter-class CBR1000RR, a machine loaded with a heap of race-bred technology and offered in a more manageable package. Experienced riders will enjoy the HESD steering damper, the upgraded Big Piston Fork front suspension, the revised cylinder heads, exhaust and intake.

2013 also brings a better riding position, which helps the rider connect better with the bike, especially during track use. Full-racing instrumentation is integrated in the dash, while the mass has been centralized even more, for better control. A treat for the thrill-seekers, the 2013 CBR1000RR is Honda's flagship superbike.

The Honda Fireblade comes with an inline four-cylinder 999 cc liquid cooled engine. This monstrous beauty puts out 153.1 hp, 10670 rpm and has a torque of 106.2 nm, 9630 rpm. Its seat height has been decreased from 830 mm to 820 mm and it weighs a manageable 205 kg. It flashes through 0-60 mph in just 2.6 seconds and has a top speed of 174 mph. To supply the fuel needed for the bike to be so incredibly super-powered, it has a fuel capacity of 18 liters + 4 liters (reserve) and has an incredible mileage of 38 mpg. The soft compound tires and the wide wheelbase of the Fireblade which is 1410 mm gives complete control to the rider even in the most deceiving corners and delivers an astounding braking of 0-60 mph in just 37 meters.

The CBR1000RR is the first inline four-cylinder engine from Honda to use Throttle by Wire control. Derived and developed from the system used by the RC213V-S, its job is to put precise throttle control – and a very natural feel – in the rider’s right hand.