The CBX750, or RC17 is a Honda motorcycle sold primarily in Europe, South Africa and Australia. Manufactured from 1984 to 1988, the CBX750 was developed from the CB750, in parallel with the VF750, a wholly new design. It is also used for motorcycle police in Malaysia, Singapore, Hong Kong, Turkey, Gibraltar & Ireland.

The pre-1988 CBX750 had a 16in front wheel, which restricts replacement tire choice. 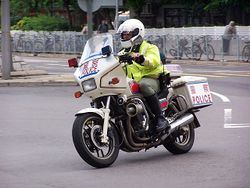 The CBX750P is based on a Japanese CB750SC "Horizon". Which is like a CB750SC/CB700SC Nighthawk S, but with an 18inch front wheel and shaft drive. Unlike the Honda CB700SC, CBX750P uses a slipper clutch (back-torque limiter) and diaphragm spring to engage clutch.

Similarities between the CBX750P and the CBX750, other than the name, end at them sharing most of the engine parts.

The motorcycle also has 4 safety guards (2 on each side), a meter-stop option (to record top speed), loud speakers, and no fuel gauge.

The CBX 750 F2 (Also CBX 750 FII) is a Honda motorcycle sold primarily in Europe, Brazil and Japan. The CBX 750 F2 was developed from the CBX750, in parallel with the VF750. Until today, many spare parts can be ordered directly from Brazil.