Difference between revisions of "Honda CL200"

The Honda CL200 was a 4-stroke 200cc motorcycle built by Honda in 1974. The CL designation indicated this model to be the "Scrambler" version which implied some off-road capability. (prior to actual dirt-bikes gaining popularity.) The CL series of bikes were actually street bikes with a higher rear fender, a braced handlebar, and a high-mount exhaust. 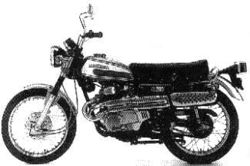 The Honda Scrambler 200 CL200 was sold in 1974 and was similar to the Honda CB200K. One color was available: Candy Riviera Blue. The fuel tank and side covers were blue, but the fuel tank stripes were white. The "CL200" side cover emblem was yellow and white. Unlike the exhaust system of the CB200 which was mounted under the transmission gearbox on either side of the bike, the exhaust system of the Scrambler was mounted above the gearbox with both pipes on the left side of the bike. The exhaust pipe and heat shield were chrome. The engine was a 198cc 4-stroke OHC parallel twin with a 5-speed transmission. The serial number began CL200-1000001.