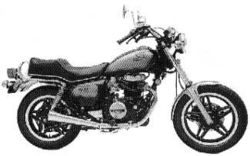 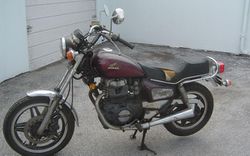 The Honda CM450C-82 Custom was sold in 1982 in one of two color schemes: Candy Muse Red with Candy Antares Red and Candy Empire Blue with Candy Dark Blue. The gas tank and side covers were 2-toned. The "CM450 CUSTOM" side cover decal was gold. The comstar wheels were highlighted black. The speedometer had a 85 mph (135 kph) limit. The engine was a 447cc SOHC 3-valve parallel twin with dual carburetors. The transmission was a 6-speed. The serial number began JH2PC051*CM000012.