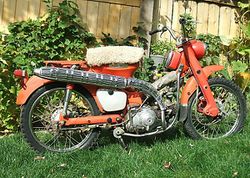 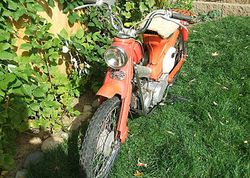 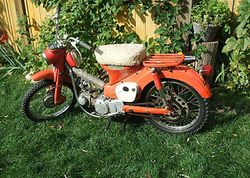 The Honda Trail 90 CT200 was sold 1964-66. The same two colors were available as the C105T: Scarlet Red and Yellow. The exhaust was up-swept. The seat was a solo seat with chrome trim. The chrome luggage rack behind the seat was standard equipment. The fuel tank decal reads "HONDA 90". On the 4-speed version, there was a dual overlay rear sprocket setup. The front suspension used a bottom link rather than telescopic fork tubes. The engine was a 87cc OHV single cylinder with 4-speed transmission and automatic clutch. The serial number began CT200-100001.