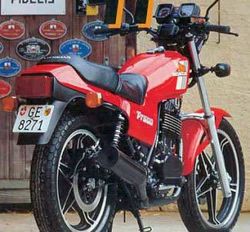 The Honda Ascot, designated FT500'82, was sold in 1982. Two colors were available: Monza Red and Black. The tank stripes and the "FT500" decal were gray and silver on the red bike; but they were red and orange on the black bike. The speedometer was limited to 85 mph (135 kph). The headlight was rectangular and so were the instruments. The bike had electric start and the exhaust system was a 2-into-1. The engine was a 498cc OHC, 4-valve single cylinder with one carburetor. The transmission was a 5-speed. The serial number began JH2PC0708CM000019.