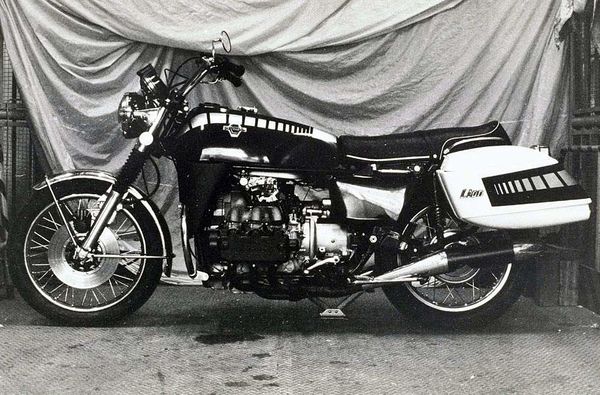 In 1972 a design team is established, led by Soichiro Irimajiri, who headed up design of the five- and six-cylinder road racing engines of the 1960s.

The team develops the M1, a top-secret prototype designed to explore the outer limits of the Grand Touring concept. The super-fast M1 features a liquid-cooled horizontally opposed six-cylinder engine with shaft drive--features that surface in the Gold Wing line in years to come.

During its development in the late 1960s, the CB750 was called informally the "King of Motorcycles" so it was fitting that Honda's next big thing would become known by the moniker "King of Kings" at inception (as well as later on). By the end of 1972, the project team had made a break with motorcycle tradition (and a complete change from Honda practice) in the form of an experimental prototype, known by the code name M1. Instead of a transverse engine layout, the M1 motorcycle (still in the possession of Honda R&D today) has a longitudinal engine, making it ideal for a driveshaft even though every prior Honda used a chain for the final drive. Rather than a parallel twin or inline-four engine the M1 has a flat-six engine, and at 1470cc, it has twice the displacement of the CB750. Instead of designing it for über-performance (although some of the engineers wanted to) the M1 engine was built to produce plenty of torque across a wide power band. Unlike every other Honda motorcycle of the time, the M1 engine uses water cooling.

The M1 engine puts out 80 horsepower (60 kW) at 6700 rpm, allowing for a top speed of 220 kilometers per hour (140 mph). Unconstrained by practicalities, this brainstorm from the project team was far from a production prototype. On the contrary, the M1 was never meant to see the light of day. Nonetheless, the M1 must be seen as the primordial Gold Wing because so many of its basic and distinguishing features appear in the lineage.

The flat-six gives the M1 motorcycle a very low center of gravity, which enhances stability, but the length of this engine plus gearbox does not allow a comfortable riding position, which was so cramped that the project moved towards the concept of a more compact engine.

It was to be the King of Motorcycles. It would set new standards of smoothness, comfort, speed and quality. It led to the creation of the greatest touring-motorcycle dynasty ever. Its influence continues to be felt to this day. And it was never meant to be seen outside of Honda R&D.

The project was known only by its code: M1. Created some 42 years ago as an outrageous experiment to push the boundaries of what was then possible in motorcycle design, the liquid-cooled, six-cylinder, shaft-drive prototype was an internal exercise, the answer to a question that has inspired some of Honda’s greatest designs: What if?

To understand the M1’s significance, you have to understand motorcycling's landscape in the early ’70s, and Honda’s philosophy. Then, multi-cylinder motorcycle engines were still a rarity, with Honda’s CB750 the exception to the rule. Plus, the prevailing orthodoxy of the day made air-cooling and chain drive almost universal for motorcycles. In addition, Soichiro Honda always pushed for creation first, then the process of reconsidering and revising. This way of thinking encouraged engineers to push the limits of possibility, without the limitations of practical application. Honda also had a policy of rotating engineers between motorcycle and automotive design departments. Not that they were separate; back then, all of Honda’s engineers worked in the same large room. As a result, there was a vast cross-pollination of ideas and concepts. The M1’s project leader was Shoichiro Irimajiri, who had led the design of Honda’s classic five- and six-cylinder Grand Prix engines of the ’60s, and then gone on to assist Honda’s transition to car manufacturing. With that background, the M1’s creation, and its use of both Grand Prix racing and automotive features, seem logical, even inevitable. 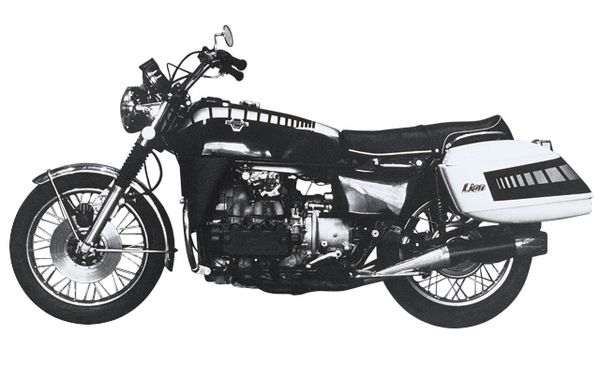 The M1 was a leap of faith, and it delivered Honda into new areas. Although it sprang from the limitless ambition to make a flagship, engineers at first had no idea what form it would take. And that was the point behind the M1, to explore possibility. What’s more, as the exploration went on, it split the engineers on the M1’s basic direction, whether it was to be a Grand Touring machine or an ultra-high-performance bike. In the end, the GT direction won out, with an engine designed for a broad powerband and flat torque curve, not the highest peak power. At a time when every other manufacturer pursued peak performance as the key to sales, the M1’s broad-power approach was a bold new direction.

While it was never originally intended as a prototype for the Gold Wing®, it’s easy to see how the M1 influenced the creation of the original Gold Wing. The six-cylinder M1 was an example of blue-sky thinking at its best, but the Gold Wing had to be mass-produced, marketed and sold. The sheer size and complexity of the M1’s six-cylinder engine made production impractical at the time, but the opposed cylinder configuration was carried into the original four-cylinder GL1000.

The M1’s influence far exceeded what the original design team envisioned. In fact, when Honda engineers began developing the current six-cylinder Gold Wing GL1500 introduced in 1988, engineers spooned the M1’s six-cylinder engine into a GL1200 chassis to evaluate the merits of a six- versus a four-cylinder. That engine, almost 20 years old at the time, became Honda’s oldest test mule.

Today, the M1 is still around at Honda R&D. It now wears a complete front end from a GL1100, replacing the CB750 front end it originally wore. The rest of it’s the same, though, from the bread-loaf-like gas tank, to the black, slab-sided rocker covers and the car-like distributor poking up from the left bank of cylinders. Look at it now and you can see back to the future of motorcycling.

The M1 helped pave the way for the current generation of motorcycles, where low maintenance, high torque, and smooth, quiet running remain marketable design characteristics. These common traits were once a radical idea that came together in a small R&D facility in Japan, in a motorcycle called the M1.