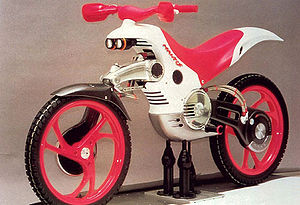 According to the experts, the future of motorcycling lies with two-wheel drive, an admittedly complex system which will endow motorcycles with greatly improved road holding and consequently make them far easier to ride, Though experts will certainly be able to make the most of two-wheel drive, novices in particular will reap the benefits of the new system, Honda showed its belief in this by unveiling the Mantis, an odd-looking futuristic vehicle intended as a glimpse of the bike of the future, at the October 1991 Tokyo Motor Show.

Unlike other attempts at two-wheel drive particularly the Suzuki and the Savage (developed in France by the Savard brothers) which use chains and transmission shafts Honda has taken a bold step into the future by fitting the Mantis with an all-hydraulic transmission, This type of transmission was used successfully on a motocross 250 cc in 1991

Honda certainly hadn't chosen an easy route, Although hydraulic transmissions are commonplace in industrial applications, they are difficult to adapt to light vehicles, The power losses have to be reduced to a minimum, and narrow-section pipes must allow a rapid circulation of hydraulic fluid at very high pressure. Honda appears to have resolved these problems, in a particularly elegant manner, with a computer-controlled hydraulic system that uses three dedicated flexible hoses to transmit hydraulic power to hub motors on the 21-inch wheels.