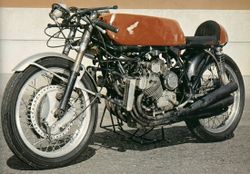 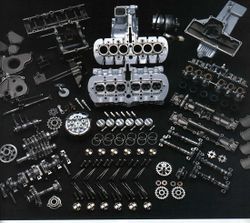 However technically interesting and highly developed the Honda RC116 and RC149 may be, the most appealing, the most glamorous racing bike ever built is no doubt the 1966 Honda RC166 six. Although the Italians are known for their creations, Carcano's masterpiece, the Moto Guzzi V8 500 cc, was a lumpish, ungainly hunk of a motorcycle when compared to the sleek, beautiful lines of the Honda. It's the comparison between a dray horse and a thoroughbred. In addition to its specifications and beauty came the incomparable, ear-splitting howl of its six megaphones and its invincibility in the hands of Mike Hailwood, which made it a legend in its time.

Although outwardly very like the RC165, internally the engine has been changed and now has a bore and stroke of 41 x 31 mm. See second image at left. Carburetors have cylindrical slides, although sometimes flat slides are used. Power output is 60 bhp at 18,000 rpm. Like the RC149, the bike has oil coolers in the right and left hand side of the fairing. Also new are the brakes, which have now radial cooling fins instead of circumferential ones. Dry weight of the seven speed bike is 112 kg.