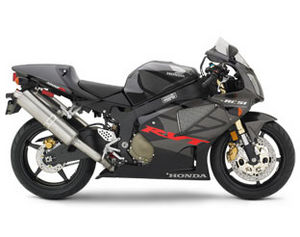 The engine was a liquid cooled v2, four-stroke. A 100.0mm bore x 63.6mm stroke result in a displacement of just 999.0 cubic centimeters. Fuel was supplied via a double overhead cams/twin cam (dohc).

It came with a 120/70-zr17 front tire and a 190/50-zr17 rear tire. Stopping was achieved via double disc in the front and a single disc in the rear. The front suspension was a 43.0mm inverted hmas cartridge fork with spring-preload, rebound and compression-damping adjustability while the rear was equipped with a pro-link hmas single shock with spring-preload, rebound and compression-damping adjustability. The RC51 was fitted with a 4.8 Gallon (18.16 Liters) fuel tank. The bike weighed just 438.94 pounds (199.1 Kg). The wheelbase was 55.91 inches (1420 mm) long.