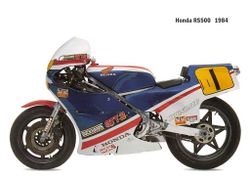 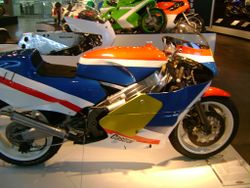 Following the failure of the oval piston NR500, Honda set out to design a simple light Grand Prix machine that would be competitive against the Yamaha's and Suzuki's. Their answer was a three cylinder two stroke, with less power than the opposition, but with less weight and complexity. A small frontal area and a compact chassis offset the lower power, and the bike was competitive from the start, being very user friendly. Ridden by Louisiana native Freddy Spencer, the RS500 gave Honda its first World title with a two-stroke.