The KTM 990 Super Duke is a sportbike manufactured by KTM 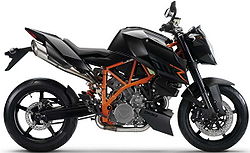 KTM's first true road sportbike, the KTM 990 Super Duke, had all who rode it gushing about gentle, giant V-twin drive, the chassis' unparalleled agility and a package that showed up much of the competition as lacking in focus and hardcore rider appeal.

Some grumbled about the bike's poor range; those ballsy with the fuel light and limp with the throttle could see 160 kilometers between fill-ups but a yellow light a less than 130 kilometers was the norm. Other tutted when the bars began a subtle but insistent weave above 160 km/h. So you fix the flaws without messing with the bike's essential rightness.

You fit a bigger fuel tank, up 3.5 liters to 18.5, and tweak the chassis geometry to kill the weave. While the bike's in R&D why not also extend the engine's rev limit by 500rpm, smooth and strengthen the engine's pull with a combination of revised fuel injection mapping and a smaller front sprocket, fit a prettier front cowl with new clocks and bolt on some exquisite radial, 4-piston/4-pad Brembo front brake calipers.

The result is a marked improvement on what was already a stunning bike. While individual elements have been brought on, the KTM 990 Super Duke's beautiful balance remains. This is the KTM 990 Super Duke riding experience in High Definition. The revised chassis an suspension retain that blend of playful maneuverability and peerless poise but iron-out the nervousness. The brakes are fantastic, with a subtle take-up that grows to brick-wall within a couple of millimeters of level travel.

But the engine remains the star. Light and compact, it lets the rest of the bike shine until its time comes, with a return to a positive throttle mid-corner.

From almost any revs, though 6000rpm plus is ideal, the KTM LC8 twin engine drags the bike toward the next braking area with a satisfying slug of drive. It's now smoother but still sounds and feels so good it's easy to hold the throttle to the stop for way too long. This truly is one of the great contemporary motorcycle engines. The engine's only real vice, its thirst, has at least been tamed by the bigger but no more bulky fuel tank.

Figure on around 160 kilometers to the yellow light. The new cowl, with that lipped 'screen', tries to suggest wind protection but it's lying, anything above 145 km/h still demands gritty determination and a low tuck over the tank.

So, there are better distance bikes on the market, but then you knew that already and besides, big, easy distances weren't in the brief. At least poor range is no longer an obstacle to buying what is, to my mind, now the pre-eminent performance naked. 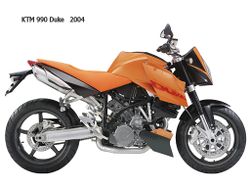 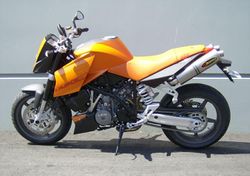 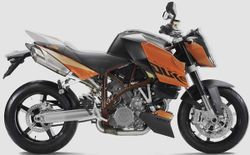 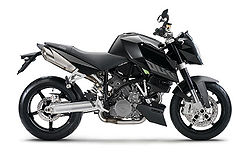 For 2007 KTM introduced the Super Duke R which has: