Kawasaki did not produce production motocross machines for the 1977 model year, as their previous version had been proven obsolete by the introduction of long-travel suspension by Kawasaki's competitors, most notably the Suzuki RM250A. Kawasaki returned in 1978 with a limited production and totally revised KX240A-4. The 1980 KX models were the first to use a modern single-shock rear suspension. Water-cooling and front disk brake were instituted with the 1982 models.

The KX250 introduced in 1974 was Kawasaki's first serious attempt at a production motorcross bike. This differed from their earlier efforts in that it wasn't an offshoot of a mainly enduro themed machine. It began a line of production motocrossers that are highly respected for their strength and competitiveness. Kawasaki has always followed a route of continuous development for their KX series lending them to always be competitive and for the speed at which factory racing developments make it into the production machines.

The first KX250 was based largely on Jimmy Weinert's 1973 machine.

It came with a 80/100-21 front tire and a 100/90-19 rear tire. Stopping was achieved via single disc in the front and a single disc in the rear. The front suspension was a inverted telescopic separate function front fork (sff) type 2, 22-way compression damping, 20-way rebound damping and 40-way spring preload adustability while the rear was equipped with a uni-trak with adjustable dual-range (2 turns high speed / 19-way low-speed) compression damping, adjustable 22-way rebound damping and fully adjustable spring preload. The KX250 was fitted with a 1.66 Gallon (6.30 Liters) fuel tank. The bike weighed just 203.93 pounds (92.5 Kg). The wheelbase was 58.19 inches (1478 mm) long.

Total redesign including frame and a new plastic tank. Offered 11in of wheel travel.

Also Kawasaki introduced a derivative of the KX250 in the form of the KDX250A. 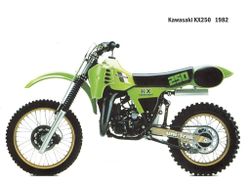 The 2004 Kawasaki KX250 is a middleweight off-road motorcycle for the intermediate and experienced riders. It sport a steel frame designed to provide the ultimate rigidity with minimal weight and the re-engineered swingarm now boasts new sporty linkage angles for better response to the demands of the discerning pilot. With separate air and oil chambers, the front Kayaba suspension is fully adjustable and can offer innumerable setups when combined with the 16-way adjustable compression and rebound rear shock. The 249cc 2-stroke engine is no toy: it produces more than 58 hp, so the addition of petal brake discs is a most welcome upgrade.

The 2005 Kawasaki KX250 is a dirt/ off-road bike, with no street-legal equipment, such as headlight or blinkers, and is intended for track and non-public roads, as well as for trails in the wild areas. The 2005 KX250 sports a 249cc 2-stroke engine, but this bike is no toy, as it produces in excess of 58 hp and should only be ridden by pilots with at least intermediate experience. The suspensions of the 2005 Kawasaki KX250 provide innumerable setup positions, thanks to the massive 48 mm oleopneumatic Kayaba forks and new Uni-Trak rear shock. The bike weighs in at only 97 kg (214 lbs) and that's one of the reasons for eliminating the electric starter. The lightweight construction is also helped by the steel frame.

Designed to be ridden by intermediate and experienced pilots, the 2006 Kawasaki KX250 is a nice middleweight off-road bike packing a lot of nifty features. First of all, the bike is not street-legal: it has no headlight and blinkers so it is to be ridden on the dirt and motocross tracks, non-public roads o wilderness trails. The 58 hp (43.3 Kw) 2-stroke liquid-cooled engine is no toy and for dependable stopping force, racing-class petal disc brakes have been installed. Suspensions are fully adjustable and can provide with a plethora of finely-tuned setups for any rider and any riding style on a variety of surfaces. The Kayaba Air Oil System fork and the lightweight, but rigid frame are responsible for the easy handling of the 2006 Kawasaki KX250 even through the sharpest turns.

The 2007 Kawasaki KX250 is a dirt/ motocross bike powered by a 249cc single-cylinder, liquid-cooled 2-stroke engine capable to deliver more than 58 hp. While the bike's nature is clearly intended for racing purposes, it therefore lacks a headlight and blinkers, being thus illegal for street use. You can enjoy it on the dirt tracks or mountain trails, or non-public roads, however. Given the aggressive and explosive character of the power unit, the 2007 KX250 comes with petal disc brakes for dependable stopping force, while the design of the very rotors keep them clean, with no dust or mud diminishing their capabilities. The perimeter steel frame is both light and rigid, offering great handling, especially with the 2007 KX250 weighing only 97 kg (214 lbs). Fully-adjustable suspensions make this bike suitable for pretty much any rider and any riding style on a variety of surface types.