Difference between revisions of "MZ ETZ250" 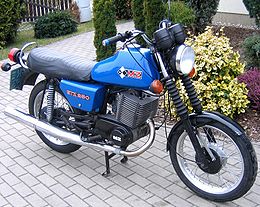 The MZ ETZ250 was a 250cc, single cylinder, two stroke, street motorcycle manufactured by MZ of Germany during the 1980s.

The ETZ250 had a standard street motorcycle appearance with a low-swept chrome exhaust on the right side, strret handlebars, two passenger seat, turn indicators, speedometer and tachometer, and generous tool box. Unusual for 250cc machines, it had a center kickstand. It's "MZ look" had a sculpted fuel tank and massive square cylinder head including large cooling fins. A special model ETZ250A was built for the army of the German Democratic Republic (East Germany) and has been exported in several countries of the former east block.

The ETZ would later utilize a front disc brake.