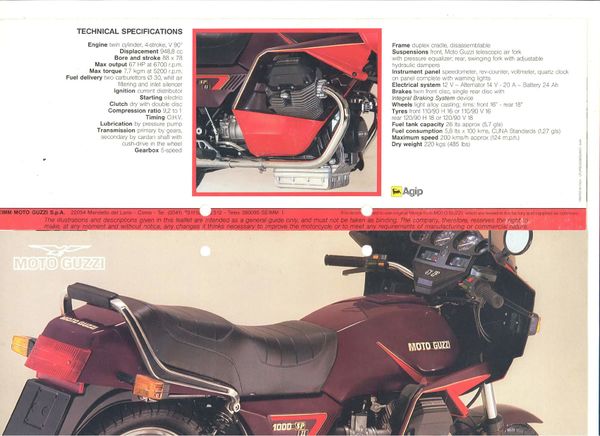 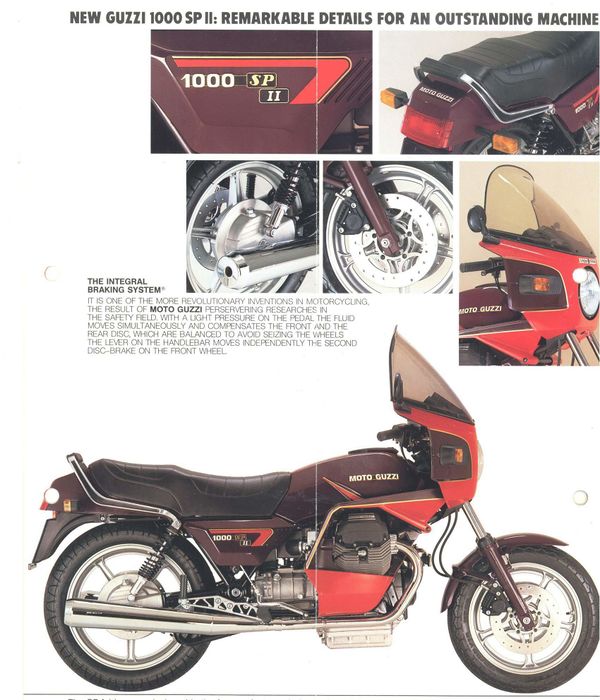 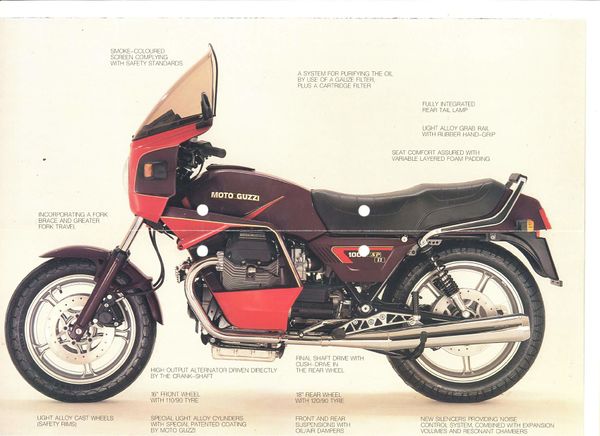 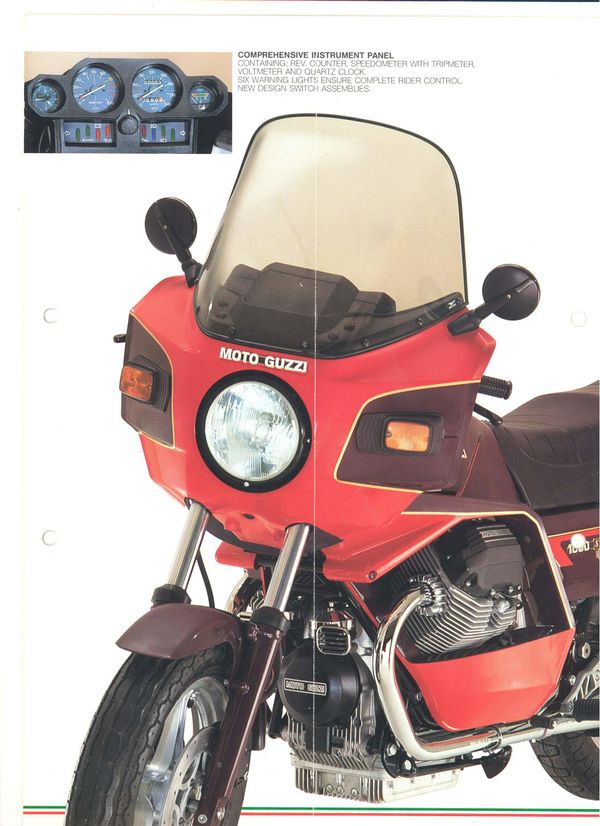 And now for something completely different.

History can't be ridden, exclusivity doesn't win trophies and style can hardly be defined, let alone sold. This brings us to Moto Guzzi in general and the 1000 SP in particular. Moto Guzzi has a history, one going back to just after WWI. They are exclusive. In most of the incorporated communities of this country a Moto Guzzi would be the only Moto Guzzi, because there just aren't very many around. As for style, take a look. This is a stunning bike. In recent years Moto Guzzis have been V-Twins. Before that they included models up to the mighty racing V-Eight, and before that they were mostly horizontal Singles. Very little in current motorcycle design would be unfamiliar to Moto Guzzi, yet the engine in the 1000 SP reflects a state of the art from half a century ago. The V-Twin in the SP is 948.8cc. Bore is 88mm, stroke is 78mm. Cylinders are angled 90° apart, sticking out to the sides of the motorcycle. Between the cylinders is a single camshaft, shoving pushrods that move rocker arms that open the two valves in each cylinder. The camshaft is run by a duplex chain on the front of the engine, a chain that also spins the oil pump. A pair of contact breaker points in a housing on top of the engine controls ignition. Moto Guzzi may be the only motorcycle company in the world today not using an electronic ignition. * This engine is nothing new. It started life as a 700cc version about two decades ago. It has undergone a careful evolution of growth and refinement. If you can't get the bugs out in 20 years, you shouldn't try. Fortunately, Moto Guzzi has gotten the bugs out and the current version of this engine is a troublefree and satisfying power plant. The original version had a big generator between the cylinders, driven by a V-belt, just like the generator on a flathead Ford V-Eight. That was replaced by a small alternator on the front of the crankshaft about 10 years ago, and that alternator has gotten bigger so that it now puts out 280 watts of power. The cylinders have been enlarged to increase the displacement, and the latest models have Nikasil bore coating, a hard, thin surface applied to the aluminum cylinders. Earlier Moto Guzzis used chrome bore surfaces. Chalk up another development victory. Pistons have been changed since the first one-litre Guzzi appeared in 1975. Although premium gas is still recommended, Guzzis run much better on inferior fuel now than they used to. And on high octane gas, this Guzzi didn't ping at all. Clearly this engine is not an artifact. It has been made to work well through continuous change, while sharing the same simple design over many years. Other features of the current engine are air filters, an oil filter, round slide Dell'Orto 30mm carburetors and a dipstick for checking the oil level. These are parts not found on some of the earlier Guzzi engines. This engine fits in a frame that has been through the same long-term finishing. It started life as the second generation frame for the big V-Twin and has been used in various models. The SP as a sports-touring model dates back to 1978. All the while there has been the more sporting Le Mans model and the touring G5 or V-1000 Convert. All the big Moto Guzzis use a strong double cradle steel tube frame. The bottom frame tubes unbolt for engine removal. They are the only tubes not straight, and they only have a small bend near where they attach to the front downtubes. The top rails are arrow straight, from the bottom of the steering head to the end of the seat. Where the cradle tubes and the mid-frame uprights intersect, the swing arm pivot is located. It's a simple frame design. It also manages to provide some features that far more intricate frame designs don't. Like a low seat height. Room for a large gas tank. Easy battery access. Good attaching points for accessories. And easy access to all engine components. What enables this frame to work so well, is that there isn't too much of anything. The engine isn't so big that it fills the frame or requires a frame of great bulk. And it isn't so heavy that the whole bike weighs too much. Even though it's a l000cc motorcycle, it's not a big l000cc motorcycle, nor a very powerful l000cc motorcycle, so medium-small tires are adequate. Keeping tire sizes down helps keep the seat height down. Also keeping suspension travel down keeps the motorcycle low. That doesn't interfere with comfort because there's room for lots of padding in the enormous seat. Not everything fits like a glove. Those big round cylinders stick out right where some riders would rather put their knees. And the lower part of the tightly wrapped fairing extends behind the cylinders, keeping the rider's knees further back. This makes for a more rearward riding position than some riders prefer. Along with this seating position, the footpegs are medium-forward. And the handlebars are narrow and don't come back far. This makes for a crouched riding position, and that's what the fairing is designed for. The top part of the Guzzi fairing is fork mounted. This makes it much closer to the rider than a frame-mounted fairing would be, so there's excellent protection for the rider just behind the fairing. Stick your head above the windshield, however, and there's a wind blast that could have come right out of the Moto Guzzi wind tunnel. Tuck down behind the fairing and the air is as calm as the middle of a hurricane. Behind the fairing are attractive Veglia gauges for speed, engine rpm, voltage and time. The clock is a simple round affair with hands. None of this digital stuff on a Moto Guzzi.

No sooner does a rider climb on a Moto Guzzi, 1976. Since then Honda and Yamaha have introduced models with similar brake systems, and they all manage to work. Stomp on the brake pedal with your right foot and the rear disc and one of the front disc brakes are operated. The hand lever operates the second front disc. A proportioning valve distributes most of the brake pedal's force to the front disc and an anti-locking pressure relief valve is used on the rear disc. Used correctly the Guzzi brakes can provide excellent stopping power. Our test resulted in distances well on the good side of average. They came after some practice, true. More important here, the difference may be one of habit. Linked or not, motorcycles have two controls for the brakes, and both systems work best if both controls are used together. Riders who tend to jump on the brake pedal at the first sign of troubleignoring the brake leverwill be served well by the linked system. They'll get front braking that they wouldn't have had. But riders who prefer independent control of the brakesthe options of using one or the other, or both may be uncomfortable giving up that freedom. Getting the most from the Guzzi's engine is much easier. Just start it up and twist the throttle. There isn't a lot available, as the numbers show. Obviously this is no peaky little engine. The powerband starts as soon as the engine does, peaks early and then slowly tapers off. Redline is 8000 rpm, though the Guzzi doesn't urge a rider to test that limit often. With the steamship-like flywheel and pleasant throttle response, the engine is most easily ridden in the bottom half of the tach. Gearing works fine for this. Keeping up with freeway traffic puts the engine at 3500 to 4000 rpm, right at its smoothest. Power is good in the middle range, and top gear provides plenty of speed for passing. Run it up to 100 mph, where the needle on the 85 mph speedometer is wrapped completely around to the 0 mph peg, and it still feels relaxed and unhurried. That's where the big fairing is so great, keeping all the blast off the rider. Riding the Guzzi at high speeds isn't so much exciting, as it is fun. The handling is absolutely stable, the steering utterly predictable and all the sensations coming through the motorcycle indicate that all is well. There are hardly any suspension adjustments needed. No damping adjustment, no air pressure. Only shock preload can be adjusted. There's also a hydraulic steering damper that can be adjusted. It combines with the short handlebars to keep steering effort higher than average, but it doesn't interfere. Steering, power and gearing all fit together to make the Guzzi a motorcycle that never feels as though it's in a hurry. That wonderful, flat, soft seat does more than anything to make the Guzzi comfortable. The suspension falls more into the category of adequate than exemplary, but the seat almost makes any suspension superfluous. That can't be said of some other details. The fairing lower section extends back too far and subtracts from the already marginal knee room. The spring loaded sidestand is almost unreachable from aboard the bike, again due partly to the lower part of the fairing. And there is more than enough engine heat from the cylinders. The SP1000 has some shortcomings on which all parties agree. We'd like a lighter clutch, lighter throttle return springs, a less reclusive sidestand, a more accurate speedometer and maybe a little bit more power. In its own way the SP1000 has a riding position as dictatorial as a Honda Magna or Suzuki Katana. Two riders found the interference fit of fairing, cylinder heads, knees and shins infuriating. One of the two adds that he also hated the seat, bars, clutch, brakes and throttle. Seldom have we ridden a better argument for insisting on a trial ride before signing the check. Mass produced, bland and designed for everybody, the SP1000 isn't. There is a lot more right with the Moto Guzzi. The appearance is dazzling. It looks like a Moto Guzzi and it's showy, but in a tasteful way. The details lend an air of quality to the machine, with nice castings, painted steel fenders and even steel sidecovers. All that history and tradition and style somehow makes the Moto Guzzi appealing, even if it won't buy you a cup of coffee. At least the Guzzi price tag is reasonable enough so that you can buy a cup of coffee after you've bought the motorcycle. About all that's missing is a dealer in every town. But that would take away the exclusivity.