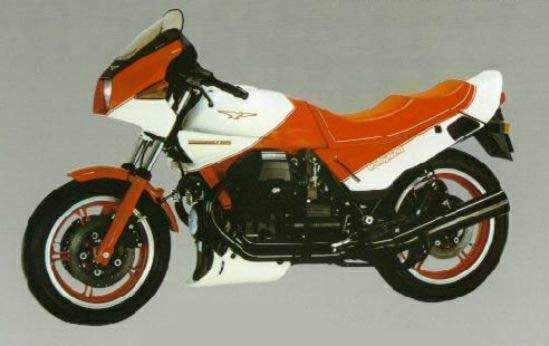 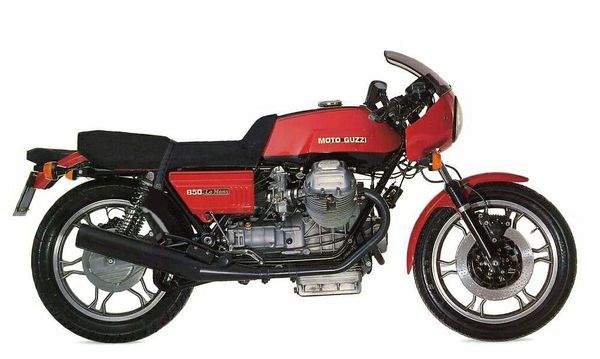 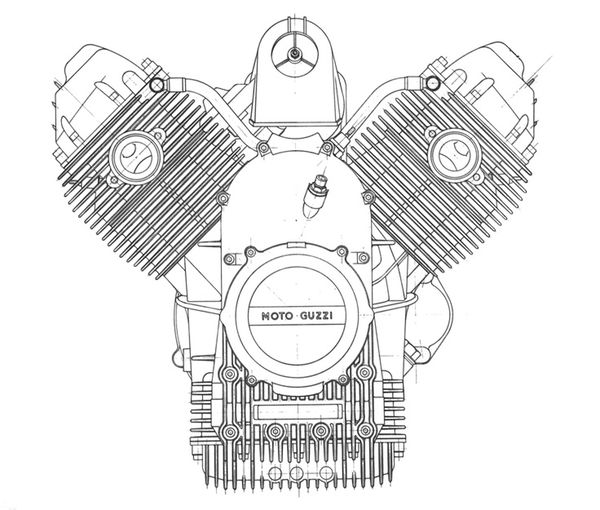 Le Mans 1000 Special Edition (SE) The Le Mans 1000 SE was introduced in 1986 and made for two years. The Le Mans 1000 SE was a limited production model made to mark the twentieth anniversary of the introduction of the Moto Guzzi V7 back in 1967. These bikes were all finished in red and white with a red seat, red cast wheels and most had black rocker covers, engine and lower rails. A few had black engines and transmissions. Only about 100 of these bikes were sold in the United States.

The Le Mans has been Moto Guzzi's top sports bike in the 80s. The big bore lOOOcc version is a recent and welcome addition in 1985 to the ranks but is essentially similar to the 850 Le Mans they have been producing, virtually unchanged, since 1977. The bike has a fine and enviable reputation as a tried, trusted and proven motorcycle. Its design may be dated and the main features are undeniably conservative and traditional. Reliability above all however has won it many friends and admirers.

The 948.8cc OHV V-twin engine with its longitudinally-mounted crank and shaft drive is not, by any stretch of the imagination a high-rewing unit. Low down acceleration and pick up is dismal, unaided by unbelievably tall gearing and a dry, twin plate clutch. Once into its mid-range stride though, with the huge 40mm carburettors really roaring, it makes strong and plentiful power. Top end performance is the long-legged Le Mans hallmark and the high gearing helps it to a blistering top speed of over 140mph with the tachometer barely showing 8000rpm. Stability and roadholding are very impressive, the bike is surefooted and responsive, a thoroughbred Italian stallion. The double cradle frame has the sump suspended between the down tubes with the engine weight carried low. Equipped with traditionally harsh, twin shock suspension, the only concession to modern chassis design has been the recent adoption of a 16in front wheel wearing a fatter tire, making the Le Mans quicker-steering than ever. As befits one of the original Café racers, everything about the bike is set purposefully low, making for a keen centre of gravity and a lovely, balanced feel. Moto Guzzi's integrated braking system is still unique among modern motorcycles and is a boon to safety. The front and rear brakes are linked so that the foot-pedal operates both the rear brake and one of the front discs for measured, controlled braking. A special distribution valve directs 70 per cent of the pressure applied to the left hand front disc and the remaining 30 per cent to the rear. The front handlebar lever brakes the right hand front disc but need only be used from very high speeds. Overall, the Le Mans is a traditional, curiously idiosyncratic bike with heavy yet strong controls, an agricultural yet unburstable engine and redoubtable Italian handling. The paintwork and finish are excellent. It is a sportsman's motorcycle, a high-profile and ever-popular machine that has long delighted enthusiasts around the world with its tireless performance and peerless reliability.