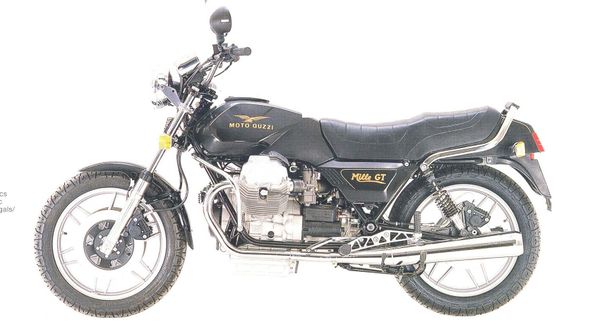 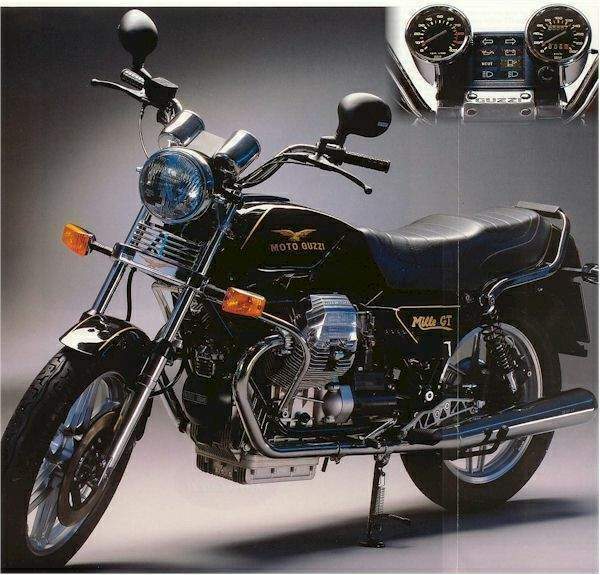 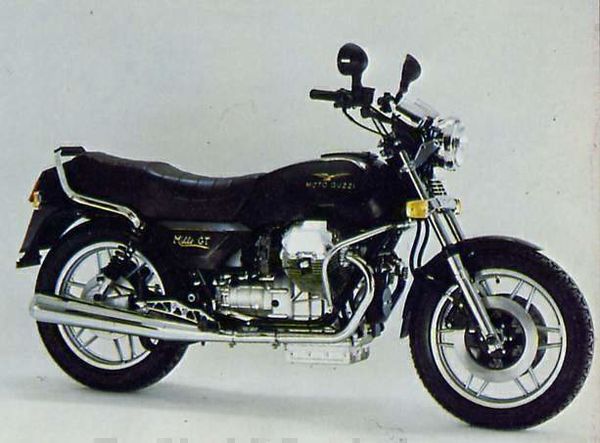 Everything old is new again Max Williams last year was when it finally dawned on Moto Guzzi that competing with the Japanese on styling as well as technological grounds was a complete waste of time. However, reversing wholesale into the 'sixties wasn't quite what one expected as a future launch policy. Yet early in 1988, Guzzi importer Keith Davies waxed enthusiastic about a 'good old fashioned' machine in the mould of 'the old 650cc V7' which had lumbered into the mists of time back in the early seventies.

The thinking behind this new model, he explained, was that in their faintly ridiculous attempts to extend the life of the ageing V-twin engines by tarting them up with wholly inappropriate (and largely unstable) 16-inch wheels and swoopy designer bodywork, the factory had all but abandoned the traditional Guzzi afficianado. My own view is that the T5 adequately displayed the old fashioned virtues of solid if unexciting power, solid if unexceptional handling and solid if uninspiring visual appeal. Only the ghastly bikini fairing and the instrument binnacle gave lie to the T5's modest mien, but on consideration, a chap who was serious enough about having a Guzzi that looked like a rea/Guzzi could've easily done something about that with the aid of a spanner and a decent breaker's yard.

As it is, Guzzi have more or less done it for him with the launch of the Mille GT. Rather than simply upgrade-or more accurately-refrograde the T5, they have bolted together a slightly curious amalgam of T5 and California. As if tojustify the GT appendage, they've taken the standard 9.2:1,948cc motor that powers the lumbering Cali and clothed it in chassis, bodywork and cycle parts from the lighter and nimbler T5. (In fact it shares its basic framework with the Cali). The gearbox and ratios are, however, those of the T5.

This version of Mandello's biggest banger puts out around 65hp and 54ftlb of torque, which is about the same as the standard T5. Considering that the Mille is actually 22lb heavier than the T5 at 507lb (dry), one wonders why Guzzi bothered putting the bigger engine in at all or if they were dead set on the idea, why they didn't whack in the 10:1 Le Mans pistons, 40mm Dellorto carbs and hotter cam which would really justify the GT tag...and make fora very interesting plot indeed.

The only immediately discernible differences between the Mille and the T5 apart from the cylinder heads, are the wheels, the instruments and of course the plastic that surrounds them. The Mille has 18inch wheels at both ends, the front shod in a 110/90 Phantom, the rear in a 120/90. Although the T5 had a 16in front end, the wheelbase remains the same at 59.2inches which suggests that the geometry has been altered slightly to protect the innocent. Where the most dramatic change occurs is in the option of good ol' fashioned wire wheels (costing £130 extra) and it's ironic that the factory had to go to Spain to get them from Messrs Akront, hence the extra cost.

The instruments are basically as per the T5 but are minus the ammeter and clock, and are stuck in chrome 'bullets' redolent of the Guzzi Florida (and every other quasi boulevard cruiser you can think of). Look a little closer at the Mille and you will notice a few other backWards steps, such as the dumping of lattice-work alloy footrest hangers in favor of sensible (and cheaper) steel tubes, the provision of sturdy chrome engine guards, and undrilled brake discs. Of course, with the arguable exception of the wheels, all of this is cosmetic and as such is spurious to the question that runs through the minds of all caring, sharing Italophiles, namely: when is Guzzi going to emerge from the dark ages and secure a future for itself that will keep the marque alive in the '90s? I'll save my own pontif ications on that subject for Lore but in the meantime it must be said that the Mille GT is not a bad motorcycle as I discovered soon after I picked up the 'standard' alloy wheeled version from the factory at Mandello. Its traditional Falcone-red livery suits the bike's image...and looks pretty too.wheeled job had a bit more feel to its roadholding, however. All Guzzis now have switchgear that is more in keeping with common sense as well UJ as industry (i e Japanese) standards. For instance, the choke control rotates around the left bar and is not the on/off affair it was J of yore. Starting and slow running are therefore less of a chore than they once were.

The clutch mechanism has also been altered to offer a slightly lighter, more progressive lever action. I soon eased into the light traffic round Lake Como on a somewhat chilly, overcast day and realised that the Mille required marginally less conscious effort to acclimatise oneself to than other Guzzis I've taken from the factory.

After the initial spitting and hesitance of cold running had subsided, I began pushing the Mille quite hard along the twisty lakeside perimeter road, soon discovering that the hard suspension forgave little in the way of road surface irregularities. Guzzi's characteristic lack of fork compliance and choice of tautly sprung Koni shocks came as no surprise of course, but I was caught off guard by the Mille's tendency towards understeer - the consequence of having ridden nothing but 16inch front wheeled Guzzis in recent years.

The Mille thus required a little more dedication to duty in the steering dept and more application of muscle than I'd made mental provision for, but fortunately the relatively high and wide handlebars considerably aided this process. A few miles up the road I collected a friend of the female persuasion and found that the added weight on the pillion actually enhanced the effectiveness of the Koni Special D shocks already set on their lowest preload (the front end was kept empty of extra air).

The pillion also had a slightly improving effect on the handling, for the extra payload kept the whole thing more firmly on the road without making the steering any heavier. So two-up we swirled around the Italian humour, abetted by the legendary torque of the grunty V-twin which, although reluctant to pull strongly at about 5000rpm, allowed the lazy rider to stick with one or two gears for almost every occasion. 18mph per 10OOrpm in top gear is what you get from an engine that will pull happily from below 1500 revs (and 25mph) in that self-same 4.37:1 cog. Spirited, rather than wild, activity in the engine room yields an entirely acceptable fuel consumption figure of 47mpg overall, which is damn good for a machine of this capacity, regardless of performance. And it's also slightly better than the 45mpg I got from last year's T5!

The engine will rev quite handsomely if you stoke it harshly enough, and by screaming the thing up to the 8000rpm bloodline in fourth gear and then dumping up into top, the Mille would clamber up to an indicated 120mph at 6500rpm. Knowing the legendary inaccuracy of Italian instruments but having no available means to check the Mille's speedometer, I suspect that this means around 105/110mph. As neither I nor anyone else of sound mind expects tarmac blistering acceleration from a Guzzi engine any more, one has to content oneself with the rorty exhaust note and the sense of simple yet visceral engineering that delivers it. The biggest of the Mandello twins is not a particularly free-spinning engine, sharing as it does the same heavy flywheels as the California-spec motor, but the 30mm DellortoPHF carbs put gas into the combustion chambers quite efficiently and the feeling you get when you crack open the throttles is stimulating in an entirely different way from indulging in the same activity on a liquid-cooled, five-valve Japanese multi.

This slow-but-responsive solution to the quest for motorcycling's ultimate virtues is not, unfortunately, complemented by the Mille's brakes, which feel unnervingly wooden and thus encourage overbraking until you get used to them. When the front anchors bite, they bite-which caused a bum-clenching prayer for more road the first time I nearly locked up the front wheel. Again, the inconsistent retardation curve of the Brembos is something I adapted to in a relatively short time, but the lack of sensitivity was not.

On a more positive note, I can report that in addition to vastly improved switchgear, the array of idiot lights is both more comprehensive and more immediately legible than on last year's Guzzis. There is now a fuel level warning lamp (when it glows, you've still got about two gallons left out of five), as well as the normal stuff. To the left of the lamp panel (and just above a rather flashy polished alloy handlebar clamp), there's now a button that activates an emergency flasher system.

The Vitaloni mirrors are of the same ilk as the T5's - ugly but highly effective. I can't quite understand why Moto Guzzi built a traditionally styled machine yet didn't opt for something that looked more the part-surely they would've been cheaper? The same goes for the plastic fenders and alloy grab rail which are straight off the T5 and rather inappropriate with their mild aerofoil styling. Build quality gets better each year at Mandello but only by small increments, which means that this year's models are put together and finished to a slightly higher standard than last year's models. However, the Guzzis are still a bit below the norms tolerated by the Big Four, and certainly way behind those of BMW. In some respects Guzzi would seem to be grasping at straws with the Mille GT, but when you learn that the Mille was actually developed (although that's rather overstating it) in response to dealer demand, primarily from Germany, then maybe it's not such a dumb move. Les Harris proved that there was a steady market for his bitza Bonnevilles, and even his Rotax-engined Matchlesses are allegedly selling quite well. The demand for machinery that is reliable, easy to maintain Heavier Cali's drilled Brembo discs are better in the wet. Forks are softer, more progressively sprung than Mine's, thus improving ride quality but roadholding handling still ponderous. sounds and sensations that don't conform (or, unfortunately, perform) to mainstream standards may very well be on the increase. It's something of a shame that a bike like the Mille, whose true development costs must've been amortised a decade or more ago, still costs as much as far more sophisticated and exciting machines. As long as that's the case, its appeal will remain with a dwindling band of oldsters who remember what this sort of motorcycling was all about and who can afford to indulge their nostalgia and whimsy. Those who've known nothing but high-tech Oriental sportsbikes will be unlikely to consider time-warp travel aboard a Mille GT unless it were sold for a lot less than 4399 ponds. Source Motorcycle Magazine 1988