Difference between revisions of "Piaggio BV500" 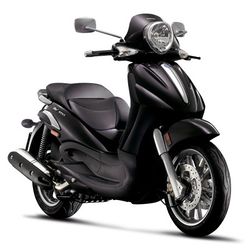 Ideal for navigating-and escaping-city streets. A scooter agile enough for the city with added power for "touring" capabilities. Perfect for long distance rides as well as getting in and around town with power and style. The BV 500 will give you the freedom to move in total comfort wherever you want to go.

The engine was a liquid cooled single cylinder, four-stroke. A 92.0mm bore x 69.0mm stroke result in a displacement of just 492.0 cubic centimeters. Fuel was supplied via a single overhead cams (sohc).

The bike has a automatic transmission. Power was moderated via the dry, centrifugal, automatic. 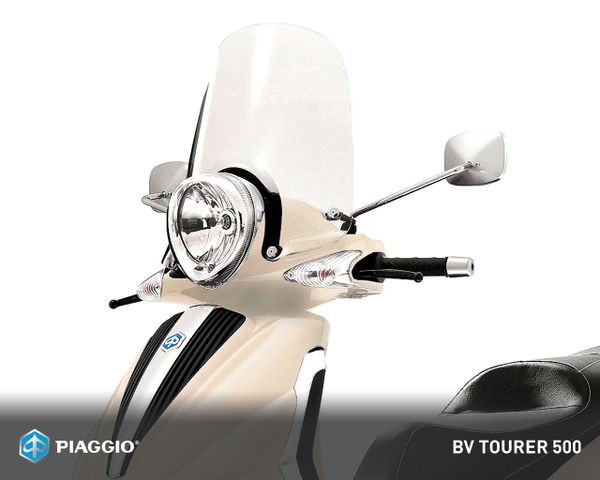 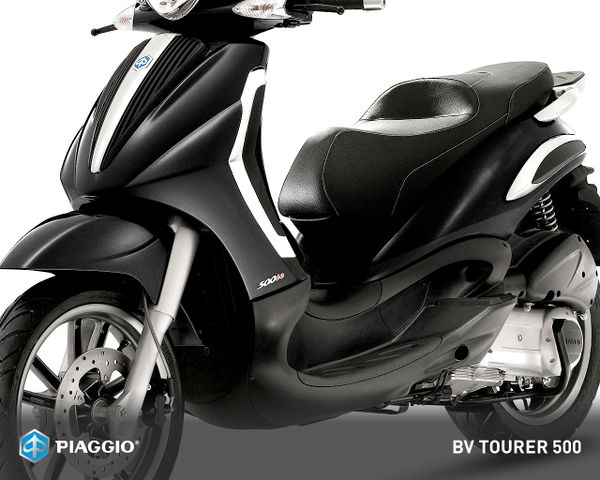 The 2009 MY Piaggio BV Tourer 500 is a big-displacement (in the scooter world), machine that is capable of long hauls, solo or two-up. At its heart lies a liquid-cooled, four-stroke, 460cc, single cylinder Piaggio MASTER lump mated to a continuously variable transmission. This lump is capable of producing 39 horsepower and 43 Nm of torque. it comes standard with a large windshield, for improved protection against the elements, as well as a dual hydraulic shock absorber with a four-position spring pre-load, which makes for a more plush ride, as well as improve the overall maneuverability of this two-wheeler. In addition, it features a under-seat storage compartment that can fit a full-sized helmet, as well as a smaller, front storage compartment. 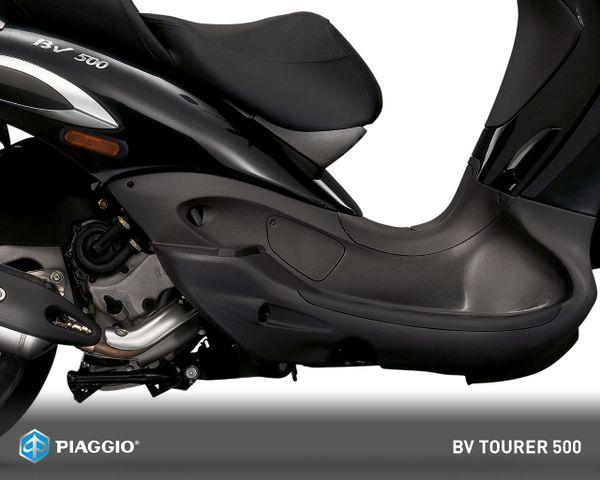 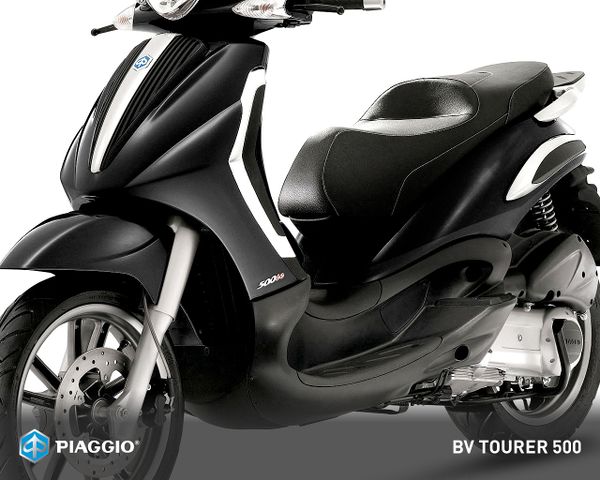 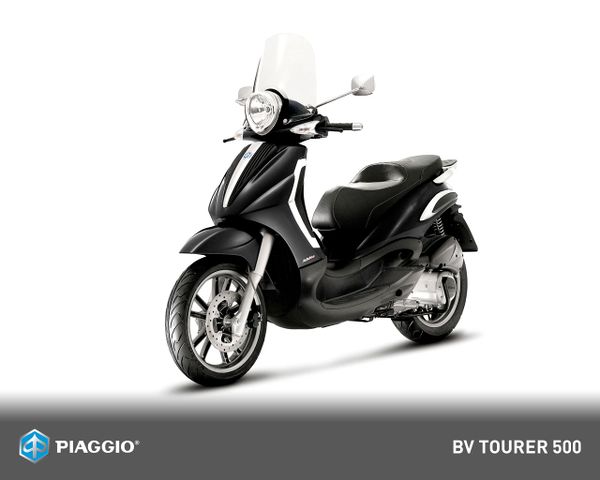 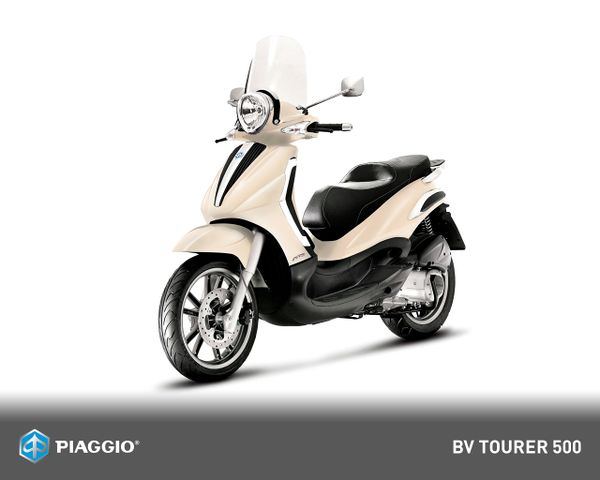 The 2010 MY Piaggio BV Tourer 500 is a maxi-scooter that addresses those riders who want to spend more time in the saddle of their machine, either alone or two-up. It comes standard with a large windshield, a two-up seat with lumbar support for the riders, pillion grab rails, and a comfortable, yet, high-end suspension package, which also improve the cornering abilities of this two-wheeler.

At its heart lies a liquid-cooled, four-stroke, 492cc, single cylinder Master powerplant mated to a continuously variable transmission, and can produce 39 horsepower and 43 Nm of torque. 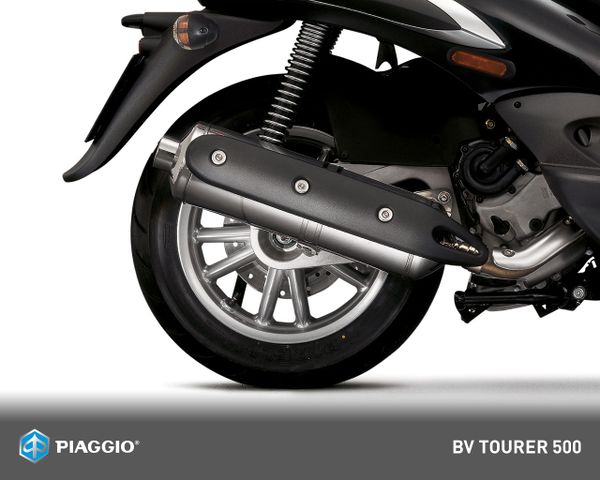 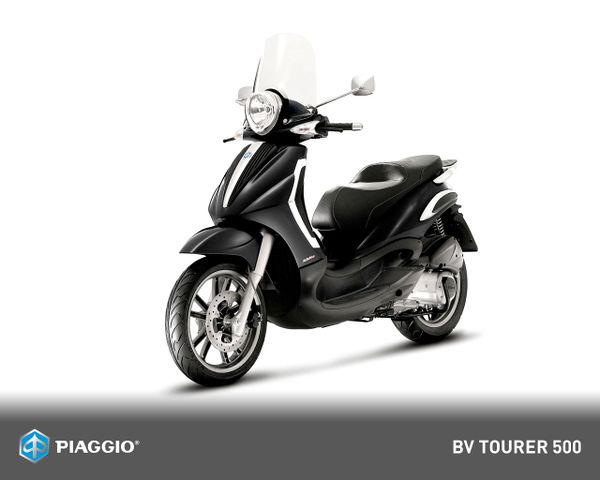 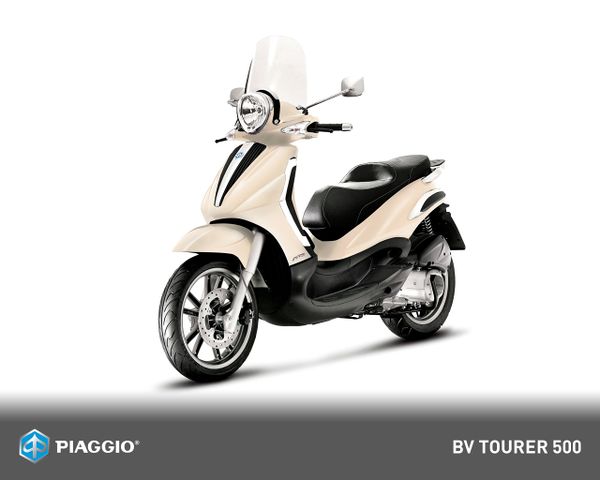 This maxi-scooter addresses those riders who want a machine capable of going the extra mile, whether solo or two-up. At its heart lies a liquid-cooled, four-stroke, 492cc, single cylinder Master powerhouse paired to a continuously variable transmission, and can produce 39 horsepower and 43 Nm of torque. It comes with a large windshield, a spacious two-up seat with lumbar support for the rider and passenger grab rails which increase its touring capabilities. In addition, it features a 41 mm telescopic fork and two dual effect hydraulic dampers in the rear, with four-position coil springs, which make for increased maneuverability, as well as a higher level of comfort.