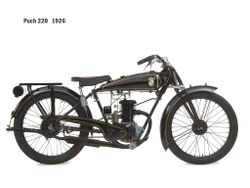 Puch, which began production in 1930s, is Austria's oldest bike manufacturer. In 1923 the company introduced a 220cc two-stroke with a split-single engine layout that continued to be built into the 1960s. Puch motorcycles were marketed in the U.S.A. by the Sears, Roebuck Co. from 1950 to 1979 under the Allstate label. Later models have included trials and motorcross machines, often with 500cc Rotax engines. Recent production has focused solely on mopeds.

Puch built innovative two-stroke machines that featured two pistons on a single connecting rod. This unusual arrangement allowed them to use unsymmetrical port timing, which improved the power output.