Rat bikes are motorcycles that, over time, have fallen apart but been kept on the road and maintained for next to nothing. Survival bikes look similar to, but are different in purpose from rat bikes--they are modified for stylistic reasons. 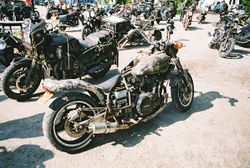 Rat bikes at the UK Rat and Survival Bike rally, 2005 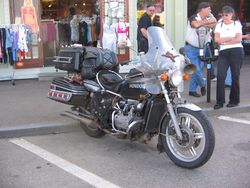 The concept of keeping a motorcycle in at least minimally operational condition without consideration for appearance has probably characterized motorcycle ownership since its earliest days. However, since the general upturn in economic conditions of the late 1960s, trends seemed to favor replacement of well-worn bikes with newer models, or with maintenance that conserved the appearance of a like-new condition. "Rat bikes" seemed to appear in the late '70s to early '80s, before the term was even invented, in large part as a social statement in favor of functionality over the aesthetics of like-new appearances. The essence of a true rat bike is keeping a motorbike on the road for the maximum amount of time while spending as little as possible on it. This calls for adaptation of parts that were not designed to fit the model of bike in question. While the origin on the term ratbike is unclear, it is generally attributed to custom motorbike magazines[1][2]and retrospectively applied.

Rat bikes do not have to be matte black, however the vast majority of rats seem to be so these days in what may be a cross over from survival bikes. These two kinds of "customized" motorcycles may appear similar but are a vastly different species.

More recently, there has been a trend of deliberately customizing bikes into rats, but this defies the organic growth into a rat bike that characterized them originally and led to their uniqueness. Bikes deliberately distressed to look like a rat bike are sometimes derisively referred to as fake rats. Currently the "rat style" is also gaining popularity in car customizing circles, though again in a somewhat misunderstood manner where vehicles are carefully decorated or modified to look worn with age. It is much like the distressing of furniture 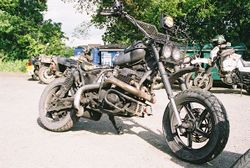 Survival bikes are bikes that may appear to be rat bikes, but are not. They are influenced by the Mad Max films. The term survival bike itself originated in the British motorcycle press (particularly, Back Street Heroes[3] and the now defunct AWoL) in the late 1980s/early 1990s.

For many, both rat and survival bikes present an ideological alternative to the consumerist mainstream. The endless quest for speed of the modern sportsbike or the large areas of chrome on cruisers or factory-produced, "custom"-style bikes is subverted by the alternative approach of the rat bike enthusiast. Matte black paint requires no polishing, unlike cruisers with lavish amounts of chrome and custom paint jobs. Similarly, the guiding principle of functionality and practicality make usable power in all road situations more important than speeds that can only be attained on a racetrack.

Whereas many take pride in, or are impressed by, the latest/biggest/fastest/most expensive motorcycle, the ratbiker is impressed by ingenuity and frugality. A decades-old bike that has been kept on the road by whatever is at hand or a resurrected wreck is more prized than a shiny, right-off-the-show-room-floor, new motorcycle.