Difference between revisions of "Straight-four" 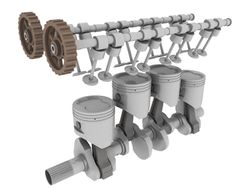 Most inline-four engines below 2.0 L in displacement rely on the damping effect of their engine mounts to reduce the vibrations to acceptable levels. Above 2.0 L, most modern inline-four engines now use balance shafts to eliminate the second-order harmonic vibrations. In a system invented by Dr. Frederick W. Lanchester in 1911, and popularised by Mitsubishi Motors in the 1970s, an inline-four engine uses two balance shafts, rotating in opposite directions at twice the crankshaft's speed, to offset the differences in piston speed.[3] However, in the past, there were numerous examples of larger inline-fours without balance shafts, such as the Citroën DS 23 2,347 cc engine that was a derivative of the Traction Avant engine, the 1948 Austin 2,660 cc engine used in the Austin-Healey 100 and Austin Atlantic, the 3.3 L flathead engine used in the Ford Model A (1927), and the 2.5 L GM Iron Duke engine used in a number of American cars and trucks. Soviet/Russian GAZ Volga cars and UAZ SUVs, vans and light trucks used aluminium big-bore inline-four engines (2.5 or later 2.9 L) with no balance shafts from the 1950s-1990s. These engines were generally the result of a long incremental evolution process and their power was kept low compared to their capacity. However, the forces increase with the square of the engine speed — that is, doubling the speed makes the vibration four times worse — so modern high-speed inline-fours have more need to use balance shafts to offset the vibrations.[4] 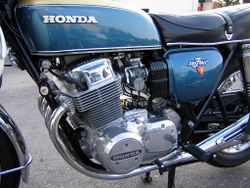 Modern inline-four motorcycle engines first gained their popularity with Honda's SOHC CB750 in the 1970s. Since then, the inline-four has become one of the most common engine configurations in street bikes. Outside of the cruiser category, the inline-four is simply the most common configuration because of its relatively high performance-to-cost ratio. All of the Japanese motorcycle manufacturers offer motorcycles with inline-four engines, as does MV Agusta and BMW who employ both longitudinal and transverse-mounted engines. Even the modern Triumph company has offered inline-four-powered motorcycles, though they were discontinued in favour of a triple.