The Super sport motorcycle is grouped into three separate classes by The Motorcycle Safety Foundation. These are: street, off-road, and dual-sport. A sport bike is a type of motorcycle under the street classification and is generally designed for optimised performance at the expense of motorcycle rider comfort, passenger/load capacity, and other features.

Until the late 1960s motorcycles came in three basic formats:

The first company to crack this mold was arguably Vincent. Designed as a gentleman's touring bike, their model's speed was astounding for days when motorways and freeways didn't exist. However, its handling was basic, and its shortcomings became clear when faced by a motorway - girder forks.

In the 1960s two bikes were developed which could be both daily commuter as well as weekend racer. These were the first sport bikes. The first was the BSA Rocket 3/Triumph Trident T150/Triumph Trident T160, closely followed by the Honda CB750K.

The 1971 Kawasaki Z1, however, with its 900cc DOHC engine finally started the era of the modern sport bike. The Z1 sold so well that by the end of that decade the Japanese manufacturers were all building competing machines similar to the Z1 with its DOHC inline-4 engine configuration. The resulting "bike war" among the Japanese manufacturers and required investment in modern engine manufacturing contributed to the demise of the flagging British motorcycle industry.

With the emphasis of a sport bike being on speed, acceleration, braking, and maneuverability, there are certain design elements that most motorcycles of this type will share. Sport bikes have comparatively high-performance engines resting inside a lightweight frame. The combination of these help maintain structural integrity and chassis rigidity. Braking systems combine higher performance brake pads and multi-piston calipers that clamp onto oversized vented rotors. Suspension systems are advanced in terms of adjustments and materials for increased stability and durability. Front and rear tires are larger and wider than tires found on other types of motorcycles to allow higher cornering speeds and greater lean angles. Fairings may or may not be used on a sport bike; when used, fairings are shaped to reduce aerodynamic drag as much as possible and provide wind protection for the rider. The performance of some stock sport bikes is so high they can be used on a race track without modification.

These overall design traits mean sport bikes are less practical for street use than other motorcycles. There are few extra features or comforts like those present on touring motorcycles such as center stands, provisions for saddle bags, large windshields, or fairings providing protection from rain. Rider position and ergonomics are compromised in favor of weight distribution and aerodynamics. This generally means higher foot pegs that move the legs closer to the body and more of a reach to a lower set of hand controls which positions the body and weight forward and over the tank.

The term crotch rocket is slang for some types of sport bikes, mainly super sport and super bikes. The name is derived from the way the rider sits on the bike and from the speed and acceleration of which these bikes are capable. A sport bike's foot pegs and shifter are located farther back than a conventional or 'cruiser' motorcycles; this puts the rider in a position that is more streamlined and aerodynamic and places the rider's crotch in very close contact with the seat.

The term crotch rocket is sometimes associated with squid, a subset of motorcyclists who may be inclined to choose sport bikes over other types of motorcycles, among other reasons due to their higher performance.

Although not officially recognized by any major motorcycle organization, the different variations of the sport bike can generally be grouped into several different classes, each containing unique features to that class. 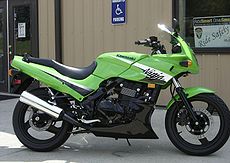 Entry-level sport bikes are designed to introduce motorcyclists to the sport bike design. They are relatively inexpensive, lightweight, and durable. There are minimal to no fairings installed to cut down on cost and maintenance if the motorcycle is dropped. Although capable of more power, the engines are usually detuned for longevity and durability. Entry level sport bikes can usually accommodate riders of all heights and weights.

Small-capacity sport bikes typically have engine sizes ranging from 125cc to 400cc, but are also produced in as little as 50cc (sometimes designed/tuned for persons carrying a restricted/learner's license). Small-capacity sport bikes are available in both 2-stroke and 4-stroke cycles, although production of 2-stroke sports bikes has diminished due to tight emission laws and agreements. Generally small and light, they can suit the shorter rider; the light weight partially offsets the performance drop due to their lower power. Short wheelbase and lightness means handling characteristics are often on par with that of the typical high-capacity sport bike.

Also relatively new but gaining popularity is the new 450 super single class. A 450 Super Single is a single-cylinder 450-cc dirt bike that has been converted into an entry-level road racer. The frame, subframe, swing arm, motor and transmission are all stock, but the wheels, tires, suspension and bodywork have all been modified for on-track use. These bikes are also being modified in Australia for street legal use and are the fastest restricted/learner legal bikes available as the current laws prohibit 2-stroke 250-cc bikes.

Examples include the Aprilia RS250 and Honda CBR125R. 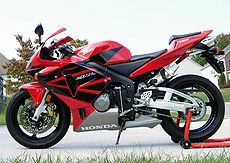 Super sport bikes (also known as middleweight sport bikes) are designed for optimal performance on a race track. They are generally built around a high revving, small displacement powerplant that is usually sized around 600cc to 800cc. Most super sport bikes will carry a wet weight between 375 lbs to 450 lbs and produce around 110bhp. Because of how strongly focused super sport bikes are on race track performance, riders below 5 feet in in height will generally not be able to flatfoot (the placement of both feet completely flat on the ground while sitting on a motorcycle) these types of sport bikes. Taller and heavier riders may find the rider ergonomics in the default position to be cramped and uncomfortable.

Examples include the Honda CBR600RR, Suzuki GSX-R600 and Triumph Daytona 675. 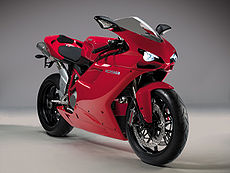 Super bikes are large displacement super sport bikes. They have characteristics similar to the smaller super sport bikes which are mainly focused on race track performance, but are powered by larger engines that are usually sized around 800cc to 1200cc. A typical super bike will carry a wet weight between 400lbs to 480lbs and can produce 180bhp. Super bikes with a displacement very close to 1000cc are sometimes referred to as litre bikes. Motorcycles in this class are usually eligible to participate in Superbike racing. 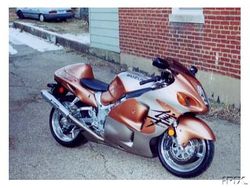 Hyper sport bikes are very large-displacement sport bikes with a strong emphasis on top speed and acceleration. They are typically powered by motors displacing 1100cc to 1400cc. Hyper sport bikes are bigger and heavier than super bikes, with wet weights generally of around 500cc. The increased weight compromises racetrack capabilities in favor of stability at speeds that can exceed 180mph. This compromise also allows manufacturers to design much more comfortable rider ergonomics. 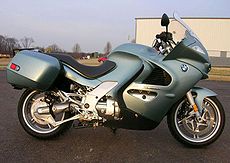