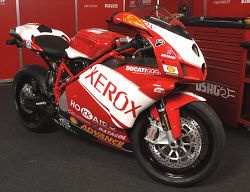 Road version of the Ducati 999 in racing livery.
Superbikes must look like their roadgoing counterparts, the most notable difference is the missing headlights and rear view mirrors

Superbike racing is a category of motorcycle racing that employs modified production motorcycles. Superbike World Championship is the international superbike championship, and national superbike championships are held in many countries as well, including the United Kingdom, the United States, Japan, and Canada. Superbike racing is very popular with manufacturers, since it helps promote and sell their product, as captured by the slogan "Win on Sunday; Sell on Monday".

Superbike racing motorcycles are derived from standard production models, so for a bike to be eligible, the manufacturer must first homologate the model and manufacture the required number of roadgoing machines. While rules vary from series to series, in general the motorcycles must maintain the same profile as their roadgoing counterparts, with the same overall appearance as seen from the front, rear and sides. In addition, the frame cannot be modified. Teams may modify some elements of the bike, including the suspensions, brakes, swingarm, and the diameter and size of the wheels.

The restriction to production models distinguishes Superbike racing from MotoGP racing, which uses prototype machines that bear little resemblance to production machines. This is somewhat similar to the distinction in car racing between touring cars and Formula One cars, though the performance gap between Superbike and MotoGP racing is much smaller.

The worlds first 'Superbike' was built by Ross Hannan in the 70's and was ridden successfully in Australia by kiwi Graeme Crosby. After fading support for the class in Australia the concept of the 'Superbike' was then introduced to the US by aussie Warren Willing and soon the AMA 'Superbike' Championship was born.