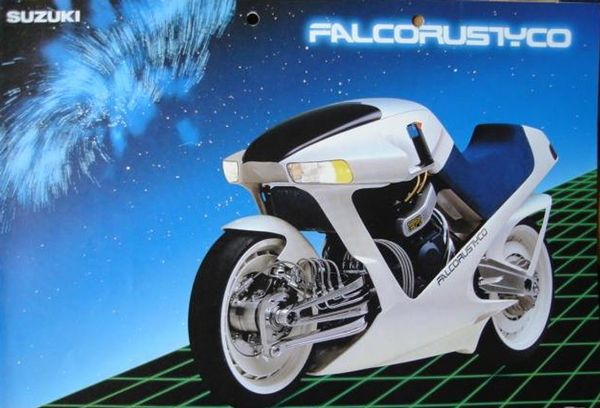 Often forgotten in favor of the less ambitious Suzuki Nuda concept from the following year, the bizarrely named Falcorustyco debuted at the 1985 Tokyo Motor Show to an entirely unexpected reaction. Look at the 500cc square four four-stroke engine, the lack of a frame, hydraulic pump two-wheel drive, hydraulic steering and electromagnet-actuated brakes and you probably think "that's a really neat concept," but the thing was, Suzuki actually managed to convince the world's press that the Falcorustyco previewed technology that would be used on production bikes 10 years later.

Well, it's now 24 years later and we haven't seen any of the Falcorustyco's technology on bikes we can buy, but what we have seen is an adaptation of the name. "Falco Rusticulous" is the latin name for the world's largest falcon species, the Gyrfalcon. The Hayabusa's name means "Peregrine Falcon" in Japanese, fitting for a bike that was, for a time, the fastest production motorcycle, the Peregrine can reach speeds of up to 240mph in a dive. But we digress, it's the Falcorustyco's technology, not Suzuki's naming structures that we're interested in here. 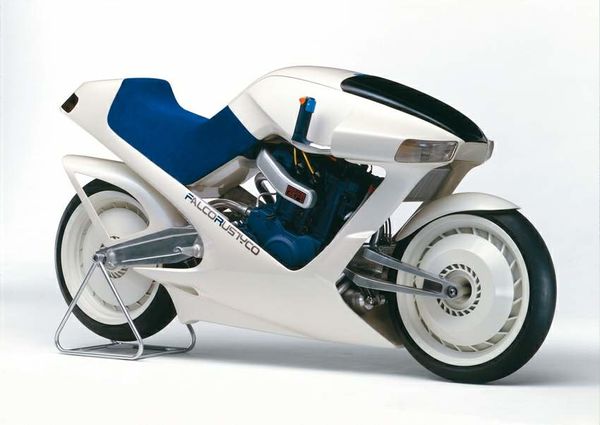 Let's start with the engine. Despite the square four arrangement, it apparently shared no architecture with the RG500 Gamma two-stroke. It's unfortunate that we can't find further info on the engine's construction, because it supposedly had three overhead cam shafts and 16 valves. The rumor is, there's no actual engine behind the covers, just empty promise.

The front and rear swingarms bolt directly to that engine, eliminating the need for a frame, while hydraulic steering also eliminated the need for a steering linkage on the front. Suspension was also allegedly "electrically controlled." Judging by other suspension technologies at the time, we'll guess that means normal old springs with variable orifice dampers, as used on the 1990 Corvette ZR1.

And don't worry, their weren't any gunky chains or heavy shafts driving both wheels on the Falcorustyco either, power left the output shaft via a hydraulic pump, which also eliminated the need for a gearbox and gears thanks to its ability to operate at variable speeds.

How on earth any of this seemed a 1990s feasibility in 1985 is beyond us. Still, that's the kind of optimistic futurism the motorcycle world currently lacks. Instead of focusing on what technology we might have in 10 years, Suzuki is currently focused on clearing its overstocked dealers. 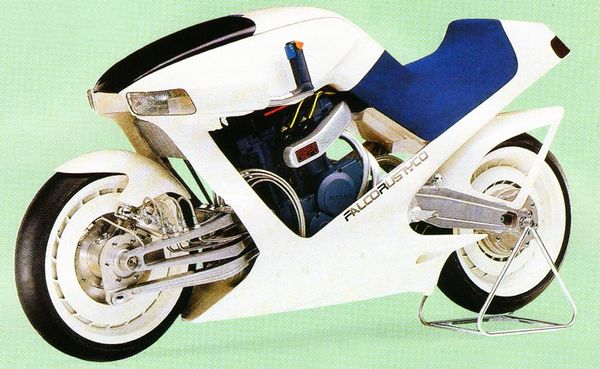