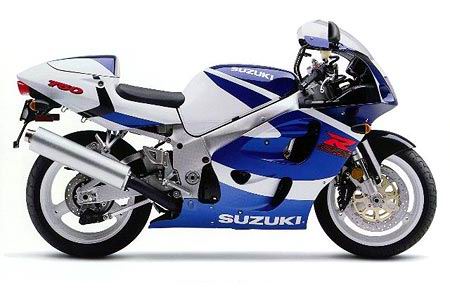 The first Suzuki street bike to be truly modeled on race specifications was the 1985 GSX-R750 which, while having evolved considerably in the intervening years, is still in production and celebrated its 20th Anniversary of production in 2005. An 1100 (1052 cc) model was released in 1986.

The 1985-1992 GSX-R models are air and oil cooled, using a large oil radiator and complicated oil circulation systems, including oil jets to cool the undersides of the pistons.

The first GSX-Rs are commonly referred to as Slabside, or "slabbies" due to their very flat side panels and tall narrow frames. GSX-R 750s from 1985-1988 are Slabside models, and the 1100 slabside was in production around 1986-1989. GSX-R750 slabbies weigh approximately 178 kg dry, and are 100 horsepower at the crankshaft. GSX-R 1100 slabbies weigh 198 kg dry and produce 130 horsepower at the crankshaft. Both respond to tuning well and very little work is required to add 5-10 horsepower. Still relatively powerful by current standards, especially given their low weight, their main weaknesses are their handling, being somewhat light and prone to head shakes (especially the 750 cc model), and brakes that are wooden and not very powerful. Being somewhat lightly built for their power subsequent models improved only modestly on power but substantially on thicker, strong frames and stronger suspension. They can be hard to find in standard condition these days, due to being a popular model for the 'streetfighter' crowd, but they hold value quite well and enjoy a modest cult status. All GSX-R models are also colloquially known as 'Gixxers'. For the year 1987, Suzuki offered a GSX-R50 (also known as the GAG50 in Japan)that differed from its Yamaha and Honda competitors by being a 4-stroke engine.

In 2001, Suzuki reintroduced the GSX-R 1000 in the form of a 988 cc fuel injected motorcycle which put its predecessor to shame with a whopping 160 bhp at the crank. Created to compete with Yamaha's R1 series they amply met the challenge and continue to this day at the leading edge of the sports bike genre.

GSX-R Models are often referred to using their model codes W,Y,K1. These can be useful when ordering parts or downloading manuals.