Difference between revisions of "Suzuki GV1200"

Most of the information in this article came from Suzuki Madura -- The Unofficial Website maintained by Les Konley.

Production of the Madura was halted after just two years. According to Peter Seifert of Vernon, B.C., Canada, 5099 Maduras were produced.

The Madura had a V-four engine with hydraulic-lifters. The lifters reduced maintenance, and avoided the kind of cam-wear problems that plagued the Magna, but reduced the engine's horsepower. Despite displacing 100 cc more, the Madura makes almost 20% less peak horsepower.

In addition to the maintenance-free lifters, the Madura had a self-adjusting hydraulically actuated clutch, and a low-maintenance, shaft final drive.

Ergonomically, the Madura featured a low, scooped seat, swept-back handle-bars, and foot-controls that wouldn't be considered "forward" by later standards, but at the time were noted for being 14" ahead of the center of the seat.

"Madura" is an island, a peoples and a language. It also means "mature" in Spanish. Why did Suzuki name a motorcycle "Madura"? Good question. 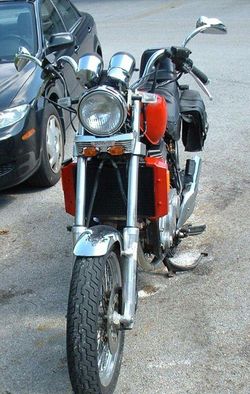 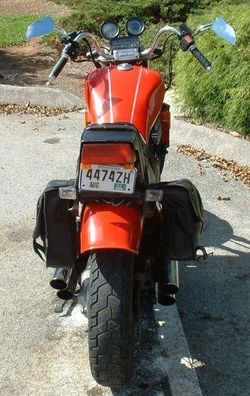 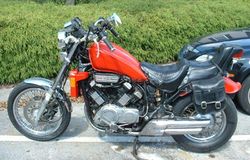