This article is about the 1980s motorcycle, for the scooter see Suzuki Katana AY50 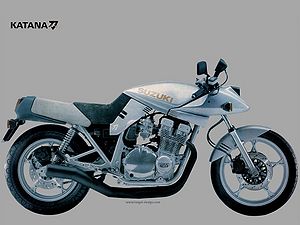 The mastermodel of the Katana motorcycle

The original Suzuki Katana was a sports motorcycle produced in the early 1980s at the instigation of Suzuki Deutschland specifically for their market needs, and designed at the instigation of Suzuki Deutschland by an outside design team which the project was farmed out to. The Katana name was later applied to a range of sports-touring motorcycles in North America (also offered in Europe but without the Katana moniker) see Suzuki GSX Series, and to a line of 49cc/50cc scooters in Europe.

The Katana was named after the famous samurai sword which is so sharp that it can cut a falling leaf.

The design team of the Katana was the southern Bavarian firm of Target Design and consisted of Hans Muth, Jan Fellstrom and Hans-Georg Kasten; Muth is still active in the motorcycle industry, building custom motorcycles under his own name, as well as have done design work for the likes of BMW motorcycles (such as the R90S, R100, R35 and R65 models) among others and the original BMW 2002 model.

The Katana design was a radical departure from the production designs at that time, incorporating the forward nose and a shaped, blended fuel tank with a merged fuel tank-to-seat arrangement at a time when squared off fuel tanks and flat-faced fairings were the norm. The design also incorporates favorable aerodynamics, with emphasis placed on high-speed stability. The same generalized design had already been used in 1979 for a one-off MV Augusta from the same design team, but which never saw production (source: Target Design). When the first production Katana hit the street, it was the fastest mass-production motorcycle on the planet, ensuring the new looks were matched by unprecedented performance levels. So radical was the design departure from previous mass-market cycles that most major motorcycle magazines of the era thought the design wouldn’t fly and that it wouldn’t appeal to the masses. So little they knew — by the mid 1980’s, all the Japanese powerhouses were trying to copy the design to some degree or other, and it can be seen in such bikes as the ‘85 Kawasaki GPZ 1100. Portions of the design ethos are still visible in some current motorcycles.

This original design was a 650cc model called the ED-1 (European Design 1).

In 1980 at the Cologne Motor Show came the ED-2, an 1100cc version based on the Suzuki GS 1100. Today, the only katana-prototype outside Japan stands in Austrias "Motorradmuseum Eggenburg" 100km northwest of Vienna. This was followed through in 1981 with almost no changes to the production version, which is often seen as the Katana as the design was so distinctive. This design was based around a modular concept allowing later for the addition of fairings and larger windscreens. The design was so successful in its basic form that these additional components were never made, apart from a small wind deflector screen. The unusual overlapping dials on the instrumentation were the result of arranging the mechanical components to fit as closely together as possible to reduce weight and costs.

The petrol filler was offset from the center-line of the tank to allow for a clean continuous seam weld. This design philosophy was applied to all areas of the bike's design, thus reducing the costs, weight, and number of components required.

Suzuki produced a 750cc version, visually almost indistinguishable from the 1100cc, and a 1000cc version intended for racing. In 1984, the 750cc version was almost completely redesigned to feature a pop-up headlight and smoother lines, as well as new "fully-floating" (monoshock) rear suspension.

Some say that the Katana gave way to the equally revolutionary liquid-cooled GSX-R series in 1986. Others will disagree, believing that the GSX-F series was the true follow-on to the original Katana series, and indeed, in several markets the Katana name was retained for the revised GSX-F series from the end of the 1980s through at least 2006, with five basic models split into two general era's: the 1988 - 1997 GSX600F and GSX750F, the 1988 - 1993 GSX1100F, followed by the 1998-onward GSX600F and GSX750F, both of which were heavily restyled for the 1998 model year). Disparaging fans of the 'original' Target Design Katanas are known to refer to the GSX-F models as 'Teapots' due to the profile of the faired-in design. It is worth noting that these same models were offered in Europe, but without the Katana name affiliation; that the Katana name was absent in Europe from 1986 until the 1999 arrival of a 49cc/50cc line of Suzuki Scooters.