In the mid-Seventies, Suzuki launched a little leisure bike, primarily intended for messing around on the beaches of California and Florida, onto tile American market: they called it the Van Van. It was known internally as the Suzuki RV90.

The little Suzuki looked as odd as it sounded, seemingly taken straight from a Walt Disney cartoon, which doubtless ensured its enormous success, albeit in an entirely different field than that intended by its designers. The Van Van was built in 50, 90 and 125cc versions, and there was even a "Farmer" version with a rough luggage grid and an oil-tight chain-case.

It was on the crowded streets of urban France, rather than the beaches of the USA, that the Van Van really caught on . Its huge saddle and little donut tires inspired confidence in its riders.Van Van looked easy, safe and comfortable to ride, and had a considerably more macho image than the other mopeds on the block. It rapidly attracted a whole new clientèle who might never have ventured onto two wheels if it hadn't been for this odd little leisure bike. Its success was even more puzzling considering that its low-pressure tires were designed for sand, which made the steering very heavy on blacktop surfaces and rendered the road holding somewhat chancy.

The engine was a air cooled single cylinder, two-stroke. A 50.0mm bore x 45.0mm stroke result in a displacement of just 88.0 cubic centimeters. Fuel was supplied via a membrane. 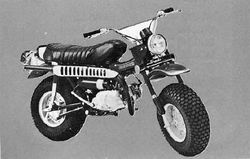 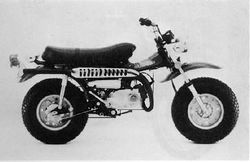 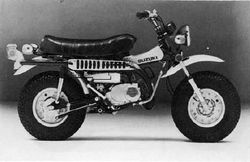