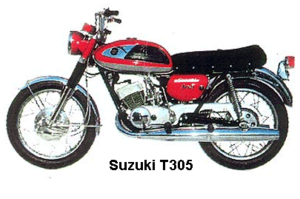 The Suzuki T305 was a 305cc twin cylinder, two stroke, street motorcycle manufactured by Suzuki in 1968.

The engine and performance were identical to the T305. Physical differences were turn indicators.