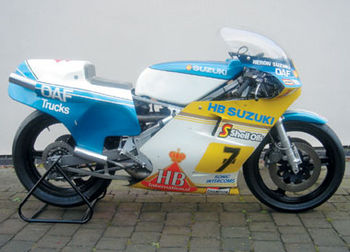 The opening three rounds of the 1981 500cc World Championship served as a further reminder to Barry Sheene (not that he needed one) of the performance gulf between 'privateer' and 'Works' Yamaha machinery. Thus, while his previous generation 'parallel four' OW53 notched up creditable fourth, sixth and third places at the Salzburgring, Hockenheim and Monza circuits respectively, arch rival Kenny Roberts brand new 'square four' OW54 recovered from suspension failure in Austria to blitz the German and Italian Grand Prix. By the time Sheene gained access to a square-four rotary disc valve engine, it was too late for him to make an impact on the Championship (though, he would still finish fourth overall one place behind Roberts). Ending the season on a high, his convincing victory amid wet conditions at the Swedish Grand Prix was a timely reminder of the two-time World Champion's sensational talent.

Beginning the following year aboard seemingly equal OW60 bikes, Sheene shadowed Roberts over the line for a dominant 1-2 in the Argentinean Grand Prix. Less than comfortable with the experience, the American swiftly upgraded to the revolutionary V4 OW61 for the second round onwards. Nevertheless, the Englishman continued to apply pressure and the pair were tied on points by the time they arrived at Silverstone for the British Grand Prix. With just three Championship rounds to go, Sheene was justifiably brimming with confidence. Entrusted with one of their precious V4 powerplants by Yamaha, he was determined to make the most of the open practice session when disaster struck.

On a busy track littered with 125cc, 250cc and 500cc racers all circulating at different speeds, he suddenly found himself confronted with a fallen 250cc bike. Doing an estimated 160mph (under braking) at the time, he was involved in the most sickening collision which few onlookers thought he had survived. Rushed to hospital, the stricken, broken Sheene was put back together with a variety of plates, rods and screws. Immobile for the best part of five months, he dumbfounded his medical team by making plans for an improbable comeback. A measure of the man, he not only managed to secure a factory supported ride for the 1983 season with Suzuki GB but also negotiated his own sponsorship space on their Works bikes! Sadly for Sheene, the XR40 lacked the speed of its Yamaha and Honda rivals. Staying true to the 'square-four' engine configuration that Suzuki had pioneered with the XR14 (by now in stepped form with the two front cylinders positioned lower than the rear ones), it was reputed to develop some 130bhp @ 11,000rpm. Less powerful than Yamaha's V4 OW70 and not as flexible as Honda's V3 NS500, the Suzuki XR40 was still best of the rest. Built from square-section aluminum tubing, its chassis frame proved light but stable.

Like Stirling Moss after his fateful Goodwood crash some twenty years earlier, Sheene found that the previous year's accident had robbed him of 'feel' if not outright pace (something of a concern at nigh-on 200mph). Though, much of 1983 was spent adjusting to how his reconstructed legs and damaged body performed at racing speeds, he finished a solid fourteenth overall in that year's 500cc World Championship gaining some much needed stamina in the process.

A justifiably proud man, every chequered flag he sped past that season must have evoked a bittersweet mixture of frustration and jubilation.