From CycleChaos
Revision as of 16:37, 21 January 2011 by Addicted2speed (talk | contribs) (Created page with "thumb|350px|XR45 Although Barry Sheene was to end his 500cc Grand Prix career as he had begun it - on a Suzuki, the relationship between manu...")
(diff) ← Older revision | Latest revision (diff) | Newer revision → (diff)
Jump to navigation Jump to search 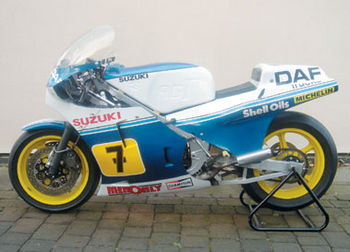 Although Barry Sheene was to end his 500cc Grand Prix career as he had begun it - on a Suzuki, the relationship between manufacturer and rider was rarely peaceful. Their first season together in the Blue Ribbon class also marked the introduction of the XR14. Brainchild of Makoto Hase, it featured a revolutionary square configuration four-cylinder water-cooled two-stroke engine. Nicknamed 'whispering death', the unit was class-leading in power terms but had a nasty tendency to seize without warning. Mated to a six-speed gearbox, it was mounted in a lightweight frame that did without downtubes but wore upright shock absorbers and a bumpy fairing (to clear its carburettors). Undeniably quick, the XR14 was also unreliable and a real handful to ride. Tamed towards the end of its debut season by a more conventional, Ron Williams (Maxton Engineering) designed chassis, two visits to hospital courtesy of a transmission lock-up (Imola) and water pump failure (Anderstorp) were almost enough to make Sheene look elsewhere for the following year.

Suitably revised with laid down shock absorbers and a smoothed fairing, the XR14 was an all together more civilised beast in 1975. However, before Sheene had a chance to exploit its potential, he was involved in his first 'big accident' while practicing for the Daytona 200 aboard a Suzuki TR750. Captured on film by an attendant TV crew, the blowout that derailed Sheene was spectacular but paled into insignificance when compared to the speed of his 'recovery'. Back on a GP bike just six weeks later, the Englishman was rewarded with victories in both the Dutch and Swedish Grand Prix. On a high, he was quickly brought back down to earth by the Suzuki factory's shock announcement that they were quitting GP racing at the end of the year.

Not so ready to give up on the XR14, Sheene formed an alliance with Suzuki GB (Heron Suzuki) for 1976. While he used the winter period to fully recuperate, Heron employed Percy Tait's expertise to sharpen the bike's chassis. Able to attract sponsorship from the likes of Faberge, Texaco and the Midland Bank, Sheene's well funded but essentially privateer outfit dominated the series taking five GP500 wins and the rider's crown in the process. Eager to promulgate such success, the Suzuki factory joined the Heron / Sheene bandwagon for 1977 contributing mechanics and some trick engine parts that helped Sheene retain his title (though team mate Pat Hennen provided some fireworks along the way).

Awarded an MBE in the New Year's honours list, the two-time World Champion attacked the 1978 season with typical aggression. However, despite some spirited rides, he found that his stepped-four Suzuki XR27 was outgunned by the Yamaha OW35Ks of Kenny Roberts and Johnny Cecotto. Making full use of Yamaha's Power Valve System, the OW35K-mounted duo took six GP500 wins between them (with Roberts securing the title). Although, the 1979 XR34 was an improvement, Sheene still considered it slower than the similarly updated OW45 and began to openly question Suzuki's commitment to GP500 racing (a stance that did not please Hamamatsu). Relations seemingly deteriorated race by race until Sheene announced that he was forming his own GP team for 1980 and leasing Yamaha machinery. Kept one step behind in development terms by the Works riders who rarely relinquished trick parts until they had been superseded, Sheene struggled through 1980, became the last British rider to score a GP500 win in 1981 and was level-pegging with Roberts on points prior to his enormous Silverstone '82 smash (he was classified fourth overall at the season's end).

Conscious that he could not 'go it alone' anymore, a battered Sheene signed for Suzuki GB the following year. Entrusted with a factory supported bike once more, he could do little in the saddle except convalesce (his highest finish being a seventh at Le Mans). Discovering that despite the pain and average results he still wanted to compete, Sheene stuck with Suzuki GB for 1984. Utilising two bikes that season, one being this Factory XR45 and the other a Harris-framed but XR45-based Special.